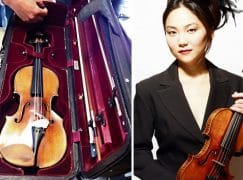 Min-Jin Kym’s Stradivarius violin, stolen from London’s Euston Station in 2010 and later recovered by police, sold today in an online auction for £1.385 million. The buyer is a UK music festival. Press release below.

The ‘ex-Kym’ Stradivarius has been sold by Tarisio, the leading auction house for fine stringed instruments.

“The 1696 Stradivari has been purchased by a British music festival led by an English violinist. We congratulate the new owner and wish them the best of luck and success with the violin. We are delighted that it will be played and enjoyed for many more years to come and that it will actively contribute to the musical vibrancy of this country through the festival and its wonderful work,” says Jason Price, Director of Tarisio.

The violin previously belonged to London-based violinist Min-Jin Kym, a celebrated international soloist and chamber musician and the story of the theft received worldwide attention and sympathy. After chasing leads across Europe, the instrument was recovered three years later by the police in the Midlands, astonishingly undamaged. The thief tried to flog it for £100.