The family of Alexis Weissenberg confirmed his death this morning to a colleague of mine in Madrid.

There are several gaps in the great pianist’s life that may start to be clarified as the world takes stock of his achievement. The first is between 1957 and 1966 when, after a successful international career, Alexis disappeared from the world’s concert halls. He was living in Paris at the time, teaching, reading and finding his inner voice.

In a book-length conversation with Gustl Breuer (details below), Alexis explained that he hated the way music became a business and an athletic contest. In self-exile, he began to explore the visual aspect of his art. A film he made in 1966 of Stravinsky’s Petrushka caught the eye of Herbert von Karajan, who was thinking along the same lines. ‘That was the beginning of the end of my peaceful years,’ he said.

William Steinberg, who had taken an interest in Weissenberg from the outset, shared a superagent with Karajan – Ronald Wilford. Once he heard the Alexis was back in action, filming the Tchaikovsky first piano concerto in Berlin, Steinberg urged Wilford to bring him on tour to the US. Karajan followed up with the Rachmaninov C minor concerto (video).

Did he regret the empty decade? Alexis was asked. ‘Not in the slightest,’ he replied. 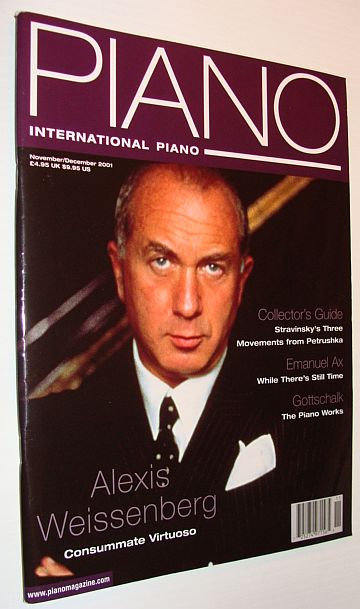 Later, he moved from Paris to the relative tranquility of Madrid, where he married and had two daughters. As Rodrigo Carrizo Couto points out in his obituary in El Pais today, little is known of his life in Spain.

In the last 15 years he virtually stopped playing, until Martha Argerich, who found him living in Lugano, brought him back at her Festival.

Like all great musical legends, Alexis Weissenberg died with his enigma intact.

Here’s a wonderful pic of the young Alexis with his teacher, Pantcho Vladigerov.

« The big noise on the Ruhr this year will be …. John Cage. Silence, please.

A new singing genre – the sob-prano »