Today at 1 pm, arriving passengers at St Pancras International will be greeted by a pop-up performance of the finale of Beethoven’s ninth symphony. Those with a few extra minutes to spare, are invited to join in the singing.

It’s part of a BBC Radio 3/BBC4 exploration of the symphonic genre. Has it ever been sung in a rail terminus before?

Simon Russell Beale, who presents the Symphony series which begins on BBC Four the following night, will host the ‘Pop-Up’ event inviting people passing through St Pancras International to come and join in the singing. Passengers will be serenaded by the BBC Symphony Orchestra and massed choir, all led by the BBC SO Principal Guest Conductor David Robertson performing one of the greatest European anthems of all time – ‘Ode to Joy’. Ailish Tynan, Daniela Lehner, Allan Clayton and James Rutherford make up the quartet of soloists for this unique performance which heralds the most in-depth exploration of the Symphony ever undertaken by the BBC. 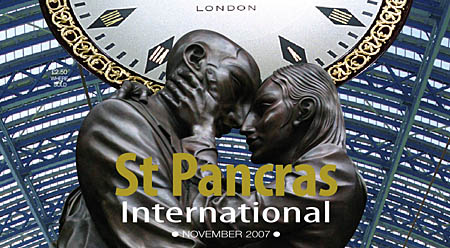 « Bayreuth news: Katie gets her next-best man, then proceeds to lose the plot