Breaking: Lady Hot signs new deal (as if you ever thought she wouldn't)

There’s been an awful lot of could-she?, would-she? speculation in classical corridors these past weeks.

Time was running out on Anna Netrebko’s deal with Deutsche Grammophon and some were wondering if she was listening to other offers.

Treb’s management company is owned by Universal, which owns DG. Where else was she going?

She reupped today, ‘this versatile, beloved star’ (see press release below). Maybe she can now afford some underpinnings. 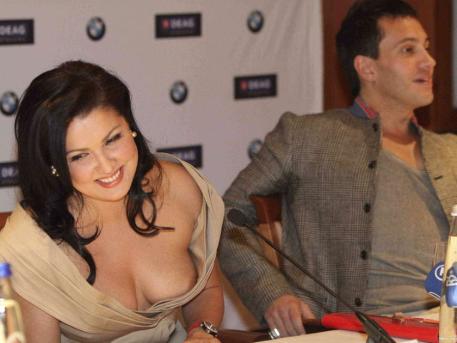 Anyhow, all can now live happily ever after that widely-syndicated wardrobe malfunction.

Well, maybe not all. I hear one of the heads at DG sleeps far from secure on the pillow he shares with another DG exec. More another time.

This New, Long-term, Pact Features Both Audio and Video Recordings

This versatile, beloved star — whose wildly popular and critically acclaimed Deutsche Grammophon discography includes, among other treasures, Verdi’s Violetta and Mozart’s Susanna at the Salzburg Festival; French, Italian, and Czech arias with Gianandrea Noseda; Italian arias with Claudio Abbado; as well as arias and songs from her Russian homeland with Valery Gergiev and Daniel Barenboim — continues to score one triumph after another.

With Pergolesi’s Stabat Mater, her recent Deutsche Grammophon album — and her first venture into pre-Classical repertoire — “Anna Netrebko gives one of her finest performances,” declared Gramophone. And in her just-released DVD and Blu-ray of Don Pasquale from the Metropolitan Opera, her Norina — the role that has made her “not just a Met star, but the Met star” (New York Observer) – was hailed by Variety as “one of the great comic performances . . .”

Her most recent operatic conquest is Donizetti’s Anna Bolena at the Vienna State Opera, a demanding role that she will bring to the Met in autumn. Reviewing her performance, The New York Times wrote: “Netrebko’s characteristically pure, beautifully formed, resonant tones are heard to ravishing effect, and the music is invested with thoughtful phrasing.”

Michael Lang, Deutsche Grammophon’s President, said: “Our long-term partnership with Anna has created the most inspired, beautiful, and artistic recordings. We are thrilled to continue this tradition with such a superb artist.”

On signing the new agreement, Anna Netrebko added: “I am happy to continue my collaboration at Deutsche Grammophon — it’s one of the most rewarding experiences in my career. We have many exciting new ideas — that I look forward to begin recording. Thank you, DG! Here’s to many more years together.”

« Another baton rising from the ranks