The composer Peter Lieberson, who died today in Israel aged 64 while undergoing cancer treatment, was the son of a musical legend and the husband of another. He took a while to establish his own voice but, when he did, the wait prove worthwhile.

His father was Goddard Lieberson, head of Columbia Records when it was known as the Tiffany Label, the man who recorded the complete works of Stravinsky, Rodgers & Hammerstein and Webern without a flicker of aesthetic discrimination. Goddard, who signed his letters ‘God’, knew the value of good music. Peter’s mother was the dancer Vera Zorina.
After 20 years of studying and teaching Tibetan meditation, Peter turned to composition full time in the 1990s. He met and married the exquisite mezzo-soprano Lorraine Hunt and, with her, formed a couple of devoted tranquility until her death from cancer in 2006. Soon after he, too, was diagnosed with cancer.
The late works that he wrote for Lorraine – Rilke songs, Neruda songs – are rapturous masterpieces, a world apart from his earlier, Buddhist-inflected contemplations. Three concertos – for viola (1992), horn (1998) and piano (2003, his third piano concerto) – reward repeated listening, as does his marvellous Six Realms for Cello, heard here.
And here’s Lorraine at Wigmore Hall, singing two Rilke Songs.
His music will not fade. Hers neither. 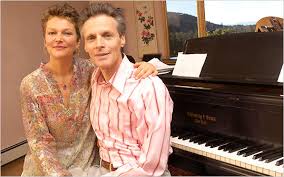 « She’s out, she’s edgy and she accepts no returns