Three monkeys in a record store

The British Phonographic Industry has announced its sixth year of straight decline, a seven percent dip last year, allied to a slowing of download growth.

Look at the stats whichever way you like and there is no gleam of light. A decision by HMV to close 60 record and book stores confirms the prevalent state of gloom. Here’s a BBC report.
The BPI blames all the usual culprits for the declining interest in commercial recordings – bad weather, store closures and, over and above the rest, illegal downloads. This official analysis is as predictable as it is irrational.
Illegal downloads do not surge if the music fails to turn on a mass public – and that’s the core concern. One glimpse at the charts shows a dominance of Simon Cowell’s TV contest winners, from Matt Cardle down. The gimmick is wearing thin, but the music industry is so hooked on Cowell’s medicine that it refuses to recognise its own slow death by overdose. 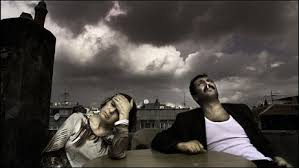 press image from Nuri Bilge Ceylan’s film Three Monkeys
One of Cowell’s regular producers told me the other day that he thought the machine was now progressively killing the music. He feared for young talent that was being squeezed out by the preponderance of TV game shows and for listeners who are being turned off.
If record sales are to rise again, industry leaders must stop acting like the three monkeys – one who can’t hear, one who can’t see and the third whose job it is to claim government protection and disability benefits. An end to the X Factor could mark a new start for the beleaguered record business.

Bad Boy Organist: what happened next »