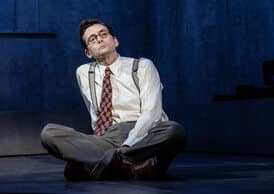 Good – Harold Pinter Theatre
I was just as shocked by the revival of C.P. Taylor’s Good as I was at its premiere in 1981 when it starred Alan Howard  as the nice, ordinary university professor who becomes drawn, by a spiral of small moves, into the web of National Socialism in the 30s.

Now it stars an exemplary David Tennant who is, if anything, even more believable as he relives each entirely comprehensible step into the moral hollow. His career will be hurt if he doesn’t join the Nazi party, his boss tells him. Well, what harm can it do? He really should show willing by participating in the burning of books considered degenerate by the higher-ups. Well, so long as he can keep his copies of the forbidden books, he can bring himself to do that. It’s just a gesture, right? His best friend is Jewish but he assures him that there’s really no danger to him or his family. It’s just name-calling after all and will soon surely just blow over. He doesn’t have to call it out, does he? Of course not.

After all, Halder is a good man, a good family man, although he falls in love with one of his students who draws him even further into the maelstrom and encourages him to leave his good marriage. As Halder relives his steps into the abyss, he is pursued by a persistent musical soundtrack which eventually morphs into a Concentration Camp band.

We come to realise that this good man is a moral vacuum, the embodiment of “go along to get along” but we see, through this terrifying play, exactly how he gets to the inevitability of what happens when ‘good’ becomes evil. The playwright is telling us that this could happen to any of us who think of ourselves as good people. All it takes is carelessness and hubris and then, suddenly, it is too late. We have become what we most dread, not ‘good’ at all.

What was originally a big cast play has been deftly adapted by its director Dominic Cooke for a cast of three who play all the parts – David Tennant as Halder, Elliott Levey as his best friend Maurice, but also as the Party official, Adolf Eichmann and others, and Sharon Small as his wife, his mistress, his boss and others. They are all terrifyingly, appallingly, well, good.

« The power and the magic of an unencumbered musical moment