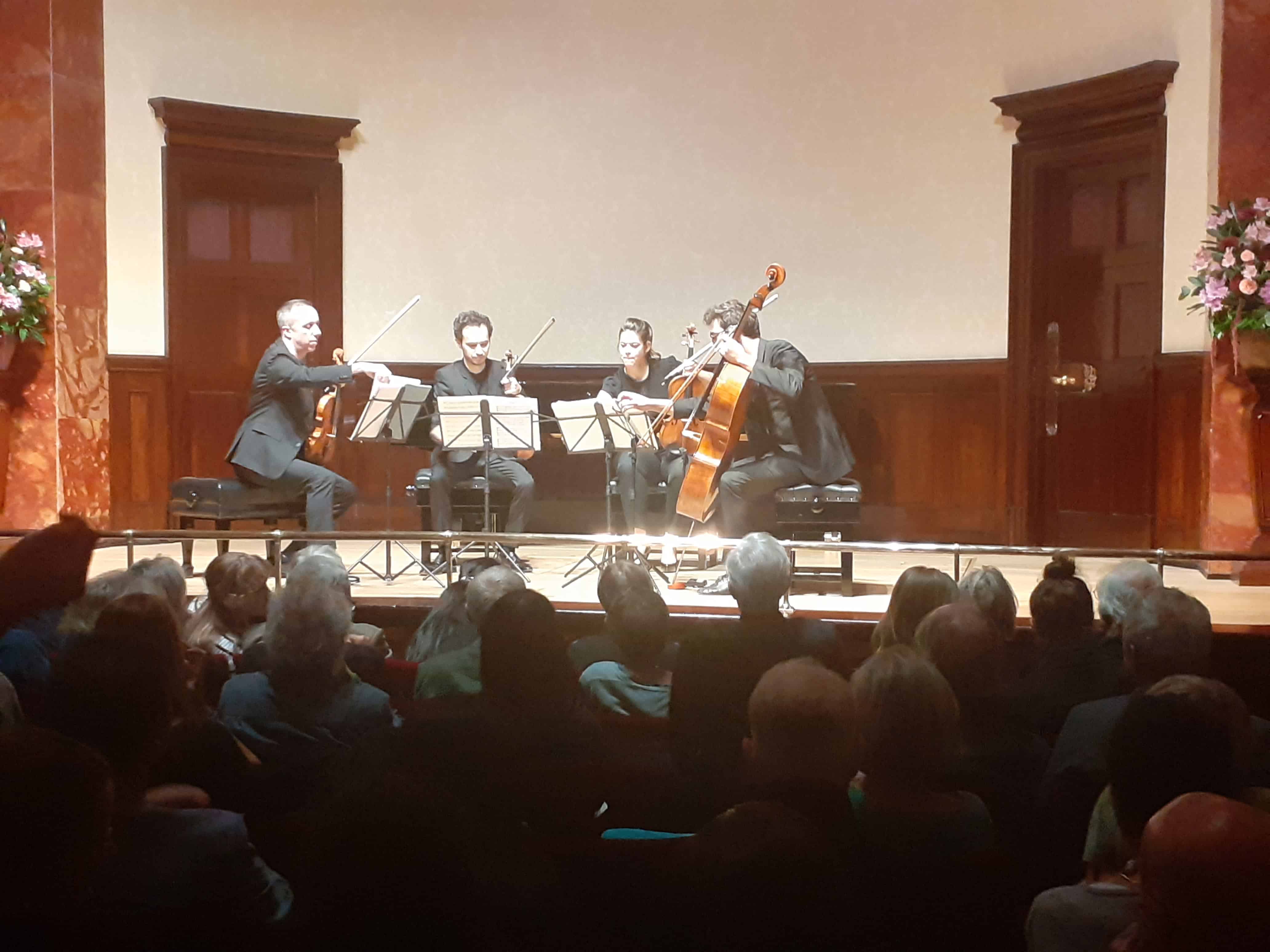 A gasp of horror went around the Wigmore Hall tonight when a violinist in the elite French string quartet announced that their founder-cellist Raphaël Merlin had broken his elbow in an accident. That is a massive blow for any musician, most of all for a string player. He will be out for a while.

They had found a replacement, Simon Dechambre of the lesser-known and much younger Quatuor Hanson. It looked like he had been summoned in such haste he had hadn’t the time to shave.

The first piece in the concert, given in honour of pianist Menahem Pressler’s upcoming 99th birthday, was not encouraging. A set of Fantasias by Henry Purcell commanded about as much audience attention as the wallpaper at Downing Street before Boris had it sexed up. The music was pretty-pretty baroque, the execution a bit tentative, understandably so given the late change of personnel.

Clearly, most of the group’s rehearsal time had been invested in György Ligeti’s first quartet. Dated 1953, it was suppressed first by the Hungarian Communists, then by the composer himself who long dismissed it with derision as ‘Bartok’s seventh’. When he finally agreed to a performance, in Salzburg 30 years ago, it was evident that this was one of Ligeti’s little jokes. The work is a diamond-cut masterpiece.

The quartet is full of squeaks, whispers and things that go bump in the night. But the choreography is intricate and the extraneous effects – pizzicatos, knocks on wood – are rationed for shock impact. Violist Marie Chilemme discovered a sensuality in the piece I’d never heard before and her interplay with the new cellist was at once subtle and dramatic. Ligeti, who was the toughest critic of performers I have ever known, would have offered grudging approval.

An unstuffy account of the first Schumann quartet gave guest cello Dechambre a moment to shine in the elusive Adagio. The quartet is part of an 1841 effusion of the composer’s love for his bride, Clara. It may be that the French mistake this Robert Schumann for the French foreign minister of similar name who was one of the prophets of the European Union. There was both Gallic elegance and supranationalism in their playing, allied to outstanding lyrical athleticism. The speeds in the finale were dizzying. The Ébènes, on this form, can seem like the most seductive and elegant quartet that ever drew bow across strings.

They drew a packed and largely youthful Wigmore Hall roaring to its feet.

Berlin Phil freshens up for Kirill Petrenko’s first US tour »