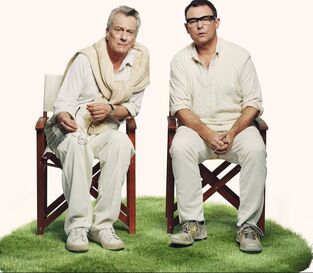 Click here for tickets
Live streaming from Lord’s on September 10 at 7pm. On demand from September 27

In common with most of the women I know, I don’t “get” cricket. Soccer, yes, baseball, yes, almost all other spectator sports, definitely. My friends know not to bother me during the tennis Grand Slams because I don’t answer emails or phone calls, being splayed for hours across the sofa glued to the fates of Serena or Naomi or Coco. But cricket? I’ve tried but, truly, it’s like watching paint dry.

However, not just in England but all over the Caribbean, the Antipodes, India and Pakistan (it’s about the only thing they agree on) men from all walks of life, all ages, all socio-economic groups, are mad about it, obsessed with it, will and do cross oceans to watch it. Which brings me to two of our greatest playwrights.

Before Samuel Beckett  wrote his seminal works Waiting for Godot and Endgame, he was a cricketer: he is still the only Nobel prize winner to feature in the pages of Wisden  (the cricket bible) as a first-class player. His good friend and fellow Nobel prize-winning author, Harold Pinter,  whose best-known works include The Birthday Party, The Dumb Waiter and The Homecoming, described cricket as ‘the greatest thing that God created’.

This witty new play by Shomit Dutta is a capricious take on what the friendship between these two great men may have looked like, as well as being a tribute to their writing and their joint passion for the game.

The Queen: A word from Simon Rattle and ‘her’ orchestra »