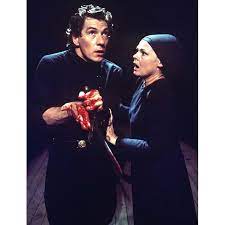 Ruth Leon recommends… MORE PERFORMANCES TO KNOCK YOUR SOCKS OFF

MORE PERFORMANCES TO KNOCK YOUR SOCKS OFF  -1979 Macbeth

Ian McKellen has earned the right, in his 80-odd years of flawless performances in classic plays, major contemporary work, and especially in Shakespeare, to do what he damn well likes these days and he is clearly revelling in trying all kinds of experiments just for fun.

​For example, this year’s Edinburgh Festival Fringe has him playing Hamlet in a hybrid drama/ballet/animation of Hamlet, a role he first played nearly 70 years ago. Good for him. If he can’t do anything he likes at his age, who can?

Here, though, amongst other great performances, is what he will be remembered for, a stunning 1979 Macbeth with Judi Dench  as his Lady and the Royal Shakespeare Company.