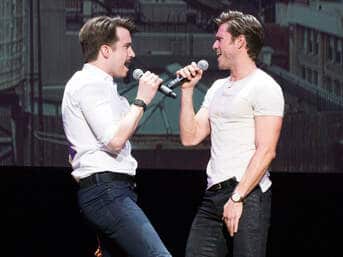 Every singer and actor has a role for which they hanker and for which they are completely unsuited. Men want to sing songs written for women, mature performers long to embody youthful characters they were turned down for when they were the right age. What mature musical theatre actor doesn’t bemoan his lost Marion the Librarian, what showbiz baritone doesn’t wish he could sing I Could have Danced All Night, and not be laughed off the stage?

Miscast is where these stars come together, each singing a song written for a role in which, for a variety of reasons, they would never, in a million years, be cast themselves. They are all famous enough but they are all screamingly wrong for the part they crave. This is their opportunity to show what they could have done if they had been old enough, tall enough, young enough, Black enough, White enough, or just plain right enough.
And that is why Miscast is one of my favourite annual events.

It is a benefit, supporting MCC Theater, it’s just plain fun and sometimes produces unlikely and memorable performances. I still cherish Raul Esparza and Lin-Manuel Miranda singing Maria and Anita’s duet from West Side Story, with such sincerity and intensity that it put all previous performances out of my head. That’s still available on You Tube If you want to catch up.

A $30 ticket gets you the Miscast22 Revue, Backstage Interviews, Behind-the-Scenes Footage, and more.

« September to December concerts on sale at Wigmore Hall