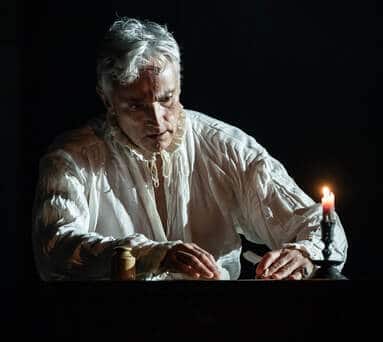 Live London Theatre – pocket reviews by Ruth Leon
The Mirror and the Light – Gielgud Theatre
I went back to the live theatre this week, several times. First, I went to bid farewell to Hilary Mantel’s monumental achievement in her trilogy of novels about Thomas Cromwell, all three of which – Wolf Hall, Bring Up The Bodies and The Mirror and the Light have now been adapted for the West End stage.The third episode, alas, isn’t a patch on the first two. It is unclear whether the rushed, almost frantic pace of The Mirror and the Light is a consequence of trying to get in every single incident in the novel or whether it was unwise for Hilary Mantel and her leading actor, the exemplary Ben Miles, to adapt her book themselves rather than bring in an experienced playwright such as Mike Poulton who adapted the first two novels.​I wouldn’t have missed seeing the plays as I’m a sucker for the Tudors, but for anyone who has now missed them, don’t kick yourself, nothing is lost by going back to Hilary Mantel’s books instead. Indeed, the opposite is true.
The Ocean at the End of the Lane – Duke of York’s Theatre
This garnered rave reviews when it opened at the Dorfman, the National’s smallest theatre, so it was inevitable that this popular fantasy would transfer to the West End. Neil Gaiman’s memory novel has been adapted into a play about two children who invent an ocean from a local duckpond which includes scary monsters, scary humans, and scary music, and is just a very well-produced variation on the old ‘lonely child, wicked step-mother’ theme. The children are played by adult actors and the puppets are really wonderful if you like puppets.
Read more

« Jonas Kaufmann and Lise Davidsen are ready for Peter Grimes

A minimum wage for musicians? »