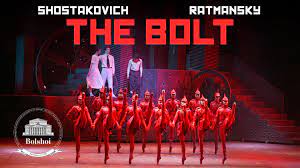 Ruth Leon recommends… A Bolt from the Bolshoi

I’d almost guarantee you haven’t seen this, even though it’s an Alexei Ratmansky ballet for the Bolshoi with music by Shostakovich. I hadn’t, until it turned up on Marquee TV. And, for a ballet freak, it’s fascinating, and really funny in places, even if you don’t know Russian. Shostakovich himself, not famous for his charm, was less than enchanted with the 1931 ballet laid onto his music, he said, “There’s a machine. Then it breaks down (problem of wear and tear on equipment). Then they fix it (problem of amortization), and at the same time they buy a new one. Then everyone dances around the new machine. Apotheosis. All this takes three acts.”

The Bolt then vanished from the repertoire shortly thereafter, for 74 years, not because of Shostakovich’s scathing review but for preaching anti-Soviet ideals and consequently, or perhaps because, Shostakovich hated it, had not been performed since its premiere in 1931 until recently, and never since its premiere in 1931. This version of The Bolt is very Ratmansky, full of neat footwork and clear gestures and his trademark sense of humour. The soloists are Anastasia Yatsenko, Andrei Merkuriev and Denis Savin but it’s really an ensemble piece and I admire how Ratmansky marshalls his huge forces of the entire Bolshoi corps de ballet.​
The Moscow press was wildly enthusiastic about this new version, pointing out that it is “incredibly exciting, outrageously entertaining, and improbably edifying, providing great fun for communists and capitalists alike”, but that’s them. It’s a curiosity, and I doubt you’ll stick with it to the end, but it’s fun to see something so completely different.