Thumbs down for ENO’s Mask of Orpheus

The first reviews of English National Opera’s revival of Birtwistle’s Mask of Orpheus are discouraging.

The Telegraph signals that ‘for the average audience, this is a physical and mental ordeal’.
Rupert Christiansen begins: ‘Over three hours long, often fiercely cacophonous, with a preposterously arcane text lacking any narrative coherence, The Mask of Orpheus makes no effort to be loved….’

The Guardian’s headline is ‘travesty of a production is nothing to laugh about.’ Andrew Clements writes:

The production is the work of ENO’s departing artistic director Daniel Kramer, and let’s hope it is the last of his shows to be seen there. For this is a wilful parade of self-indulgence, with set designs by Lizzie Clachan translating the action to a sleek modern apartment, and costumes by Daniel Lismore that might be more appropriate in a Rio carnival procession or on the Mexican Day of the Dead. It’s a gaudy display, which does nothing to tease out the complexities of a work that presents the Orpheus story as a bundle of contradictory myths where events are repeated and linear time abandoned, and in which the three main protagonists, Orpheus, Euridice and Aristaeus, are each represented on stage by two singers and a mime, representing the person, the myth and the hero. Instead, Kramer simply adds business of his own, cluttering the stage with irrelevancies. Rather than austere, penetrating ritual, all we get is camp and bling, combined with an apparent insistence on adding comedy to the action, so that the judges of the dead and the furies become a troupe of vaudeville caricatures.

David Nice on theartsdesk.com:
…the big botch is the crucial second act, where Orpheus faces the 17 arches of Hades and is supposed to lose Eurydice again and again. Peter Zinovieff’s text is loose, but not lazy. (Daniel) Kramer takes the sound and fury to signify whatever you want them to, and while the outlines of a real face sometimes emerge in the score – the smokiness of a rare saxophone solo in amongst the wind, brass and percussion, the ghost of a real dance, the desolate calm after the storm – they’re not to be found onstage. 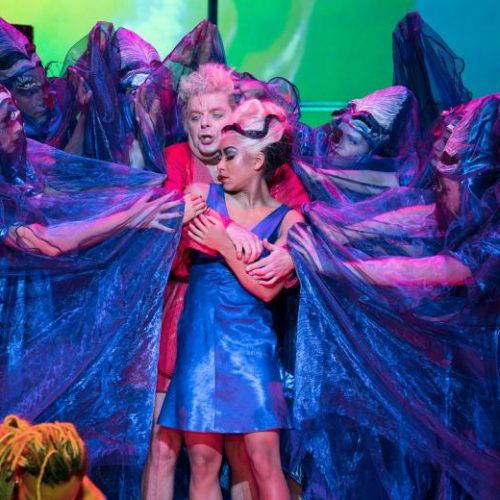