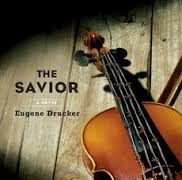 From moderator Anthea Kreston:
This fourth installment of the Fortnightly Music Book Club will revolve around the final chapters of The Savior, a novel written by Eugene Drucker, a founding member of the celebrated Emerson String Quartet. The book is a dark, often surreal novel centered around a young German violinist, Gottfried Keller, in the waning days of World War II. Many readers responded with questions, and Mr. Drucker will answer below. If you have interest in forming a brick-and-morter Fortnightly in your town, please write so we can find ways to connect.

The lives of our conflicted protagonist, the concentration camp guards and Kommandant, and prisoners become increasingly intertwined. Keller befriends a young woman prisoner, and the experiment of bringing hope to prisoners through music comes to an end. The Kommandant orders the death of all of the prisoner/audience, and Keller himself is expelled from the camp, on foot in the midst of a snowstorm. We leave the novel in a state of limbo – Keller has been rescued by his friend, the music-loving guard, and lies in his apartment, left to grapple with the reality that there is no way to escape, no redemption from these horrors.

From our guest host:
I’d like to thank Anthea Kreston and everyone who participated in the first round of Slipped Disc’s Fortnightly Music Book Club for their interest in The Savior. It is good to know that some of the issues I raised in that story still resonate for readers a decade later. The lively discussion of my work has been encouraging as I attempt to grapple with the demands of a second novel in addition to my activities as a performer.
Question:

Could you please address the internal weakness of thoughts and passive behaviors of the main character? For me, that is the theme of the book which i cannot rid myself, and a theme which I haven’t seen addressed in any of the reviews I have read.

Visiting Frankfurt, preoccupied by his thoughts on his way to the audition for the orchestra in Palestine, Keller keeps walking along the river in a trancelike state. The prospect of the audition terrifies him; he knows he won’t play well, partly because something inside him is so strongly resisting the idea of uprooting himself from Germany and leaving behind everything that’s familiar to him. He’s afraid of failure and humiliation at the audition, but on a deeper level he’s afraid of change — the change that would be necessary to keep his relationship with Marietta (his Jewish girlfriend) going.

I had intended his boarding the train and missing the audition — as well as other choices that Keller makes or doesn’t make — to represent the passivity of a large cross-section of the German population during the Third Reich. I’m referring not to active, enthusiastic party members who allowed themselves to be brainwashed by propaganda and pageantry, but to those who had their doubts all along and just wanted to get on with their own lives, hoping somehow that it would all pass. The walk along the river also represents a lost opportunity for his own happiness, and, as it turns out, the loss of his last chance to get out of Germany before the war.

His inability to be in the moment as he makes love to Marietta; his walking away from a possible life they could have had together; his struggle years later to view his listeners in the camp as human beings (a struggle in which he is grateful to succeed after the first couple of performances); but finally, the violent impulses that he has to suppress when Grete confides in him — these are all points on a moral continuum. In spite of his best intentions, because of the ethos in which he grew up, he perceives Jews as the “Other.” It is difficult for him to achieve common ground and understanding, to find within himself the capacity for empathy.

If the Kommandant’s motive in doing the experiment was studying the survival instinct, then when after the 4th concert when it was obvious that music had a very positive effect on the prisoners’ behavior, why did he stop there and have them immediately killed?

The experiment had confirmed the Kommandant’s hypothesis that music could, under certain circumstances, reinforce the survival instinct, or “bring [the prisoners] back to life.” He had no interest in the well-being or even the barest survival of the inmates beyond that. In his own chilling words (on page 185): “What good would it have done to keep them alive? Do you think it’s proper procedure to reuse laboratory animals once an experiment is completed? We’re not cheap, you know. There’s an almost unlimited supply.” In this respect, his pseudo-scientific curiosity was totally in synch with Nazi propaganda, which dehumanized Jews, Gypsies, homosexuals and others that didn’t fit into their dream of racial purity.

How did Keller decide what music to play? Do you have one or more recommended recordings of the Chaconne?

The unaccompanied violin literature is not that large (compared to solo piano or string quartet repertoire, for example). The Bach sonatas and partitas are the core of any violinist’s repertoire, so it was natural to include one of those masterpieces on each day’s program. As for the other choices: Keller begins with a few Paganini caprices in order to break through the apathy he perceives in the inmates. It turns out to be an unfortunate choice. Then he hopes that an Ysaÿe sonata, with its generous palette of warm colors, will “soothe and delight the reawakened senses of the prisoners.” Again he fails to achieve the desired result. In the second concert he begins with a sonata by the “degenerate” composer Hindemith, testing the limits of what might be allowed in this unusual concert setting; after the Bach G Minor Sonata, he adds another piece by Ysaÿe — the impassioned Ballade. In the third concert he plays a sonata he himself had composed, continuing in the direction of dissonant, unorthodox music, but also improvises wildly in direct response to the disturbing sounds and actions that yet another Bach sonata had elicited from the inmates. On the last day, the most fitting culmination for this series of concerts is Bach’s Partita in D Minor, ending with the Chaconne, which serves as a sort of leitmotif in this novel. “It is full of the joys and sorrows of this life, and a yearning for something beyond.” Even in a non-authorial capacity, as a real-life musician, I believe in this statement (page 170).

Nathan Milstein, Henryk Szeryng and Arthur Grumiaux made great recordings of all the unaccompanied sonatas and partitas. So did my teacher, Oscar Shumsky. It might be of interest to you that I also recorded these pieces almost thirty years ago, in a 2-CD set that was reissued in the mid-late 1990s by Parnassus Records.

Ms. Kreston has just asked me, “Who is The Savior? Is there one?” I should point out that this was not my original idea for a title, but was suggested by my editors at Simon & Schuster. It took a little while for me to get used to its religious implications, but I came to like its irony and the overlapping layers of meaning in that word. It has at least two different definitions in English: a savior is literally one who saves or rescues others, but in a Christian context, the word of course refers to Jesus Christ, who was considered to be the Savior of people’s souls. Gottfried Keller has a tormented relationship with his own Christian faith, which I tried to illustrate at various points in the story, but especially when he visits a church in Frankfurt after a solitary walk in the rain.

As regards the other, more literal definition: In order to keep going during his concerts at the camp, he manages to convince himself that these performances, if they fulfill the goals of the Kommandant’s “experiment,” might somehow save the lives of his listeners. Therein lies the irony: he can’t save them, so he is definitely not “The Savior.” Deceived by the Kommandant, he is complicit in deceiving himself. Finally, as he walks away from the camp and is engulfed by a snowstorm, it is the music-loving guard Rudi that finds him and saves his life.

The question that I deliberately left unanswered at the end was whether the great music that Gottfried and Rudi both loved could itself be saved from the obscene use that had been made of it.

A recent review of The Savior:

Thank you, Eugene Drucker, and Norman Lebrecht, for taking this journey with the readers of Slipped Disk. In a Fortnight, we look forward to our next selection, lead by composer Daron Hagen. He has chosen “Gödel, Escher, Bach, and Eternal Golden Braid” by Douglas Hofstadter.

Lang Lang’s thought for the day »