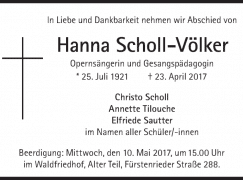 Death of a high German soprano, 95

A notice has been posted of the death of Hanna Scholl-Völker, a high soprano who sang in Florence, Frankfurt and Munich and later became an influential and sympathetic teacher.

She married the baritone Georg Völker.

Her American student Helen Donath once said of her early years in Germany: ‘ I went through difficult years, even to the verge of losing my instrument. Thanks to the great bass-baritone George London, I met Paola Novikova, the teacher of Nicolai Gedda and many other stars, and then, Hanna Scholl-Völker, daughter in law of the legendary tenor Franz Völker and wife of Georg Völker, the best Beckmesser of his time. They and my husband conductor saved me.’

« Netanyahu kills off a radio orchestra