How Israel Phil concertmaster is recovering from brain injury

Last month, reports the daily Yisrael Hayom, marked a landmark in the life of Yigal Tuneh, concertmaster of the Israel Philharmonic for the past thirty years. He left the Re’ut rehab centre and returned to visit his Tel Aviv apartment for the first time in almost a year.

On May 28, 2016, during a concert tour in Europe, Yigal suffered a suffered a severe stroke. After two months in a coma he emerged with left-side paralysis and sight difficulties. But he’s making progress… and he has got married. 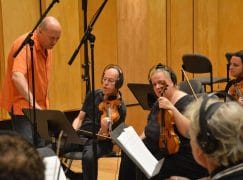