Ronald Eichman, former head of Fresno Grand Opera Company, is suing the company and his successor, an unusual twist in the general comings and goings:

Fresno lawyer Warren Paboojian filed the civil lawsuit Friday on behalf of Ronald D. Eichman and Thi Nguyen. Eichman served as general director from August 1998 to Dec. 5, 2014, and Nguyen as associate director from August 2008 until the end of November 2014. It names the opera and former director Matthew Buckman, who took over in the beginning of 2015 and left in February. There are also 50 unnamed defendants. 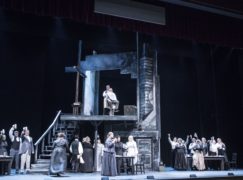