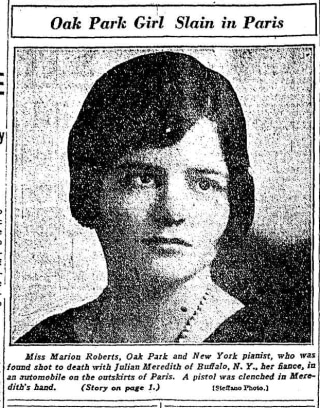 Pianist, murdered in 1927, is heard again on record

A detailed piece of detective work at the British Library enables us to hear the first and last recording of the once-promising American pianist Marion Roberts, who was murdered outside Paris by her fiancé almost 90 years ago. Marion was 26.

Eighty-nine years ago, a sensational story flashed across front pages in France and the United States. Early on the 23rd of April 1927, in the Forest of Rambouillet, south-west of Paris, a quarry worker discovered a car stopped by the side of a road. In it he found a man, in the throes of death and holding a pistol, and a woman, apparently killed by her companion’s shots.

Read all about it – and listen – here.