Forced out of the Tehran Symphony Orchestra, the conductor has rolled his own.

A new orchestra is to be launched in Tehran under the artistic leadership of Maestro Alexander Rahbari. The Persian Philharmonic Orchestra will be the first self governing orchestra in Iran, modelled on self governing orchestras in other parts of the World, such as the London Symphony Orchestra. This is an exciting development which organisers believe will breath new life into the musical life of Iran. Plans for a subscription series of concerts is underway and organisers intend to promote outstanding home grown Iranian soloists and Iranian composers as well as leading foreign guest artists from abroad.
President of Honor:
Hossein Alizadeh
General Music Director:
Alexander Rahbari
Managing Director:
Barbad Bayat
Director of Administration:
Pirooz Arjmand
Principal Guest Conductor:
Mark Stephenson
Internal Director:
Milad Omranloo
Concert Master:
Amir Bavarchi
Conductor Assistants:
Milad Omranloo
Mohammad shelechi
Public Relations Manager:
Alireza Iraninezhad 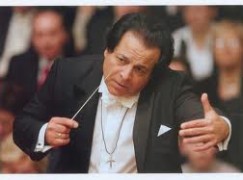 « Are you an old-school opera singer, or new?

Semyon Bychkov lashes out at EU »