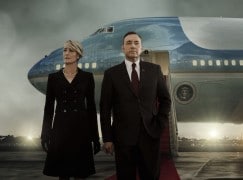 House of Cards composer responds a capella to multiple sclerosis

Eight years ago, Jeff Beal was told he had multiple sclerosis.

His response is an a cappella work, The Salvage Men, ‘a meditation on suffering and catharsis’, which receives its U.S. premiere on Sunday at Walt Disney Concert Hall with the Los Angeles Master Chorale.

Beal has also composed a symphonic work based on House of Cards. ‘Those lines between utilitarian music and art for art’s sake are starting to blur,’ he believes. ‘But I do feel something that was missing from my life, for sure, was this idea of a pure piece of music. It doesn’t need a picture. It can exist on its own terms.’

« Lufthansa’s on strike. The airline, not the orchestra.