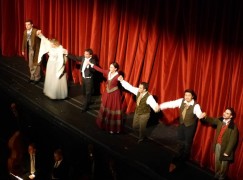 At the Vienna Opera, a soprano vents her feelings

Hier soir [Sunday]… Wiener Staatsoper … the lights went off and Marco Armiliato reached the pit. Marco kept his hands down. A singer, dressed as Parisian market woman, stepped out of the burgundy-red drapes: Renate Gutsch, since 1988 a chorus soprano at the Vienna State Opera, rose to speak with trembling voice. She pointed out that La Bohème takes place in Paris.

So, artists and co-workers of the Opera wanted to take this coincidence to give a face to their abhorrence of terror and violence. In memory of the victims of the Paris’ attacks, everyone should stand up in silence.

Some 2,100 members of the public, staff, artists behind stage… remained in such a silence you could hear a pin drop…

This was a kind of a moment, I will never, never ever, forget in my life.

Gutsch thanked the audience for its sympathy and wished us all nevertheless, or better, exactly because of that, a great evening at the Wiener Staatsoper.

UPDATE: We’ve been advised that Renate Gutsch is Austrian. She was dressed as a French marketwoman for the second act. We stand corrected.

« An orchestra gathers in Paris to play for those who died