The words belong to Bono, whose U2 concerts in Paris were cancelled in the general mourning and tight security. He went on to say:

This is the first direct hit on music that we’ve had in this so called war-on-terror or whatever it’s called. It’s very upsetting. These are our people. This could be me at a show. You at a show, in that venue. It’s a very recognizable situation for you and for me and the coldblooded aspect of this slaughter is deeply disturbing and that’s what I can’t get out of my head. … I mean again we didn’t call it off. It was cancelled, honest, and I understand perfectly why. I think music is very important. I think U2 has a role to play and I can’t wait till we get back to Paris and play and that’s what I’m feeling from the messages we’re receiving from music fans is these people will not set our agenda. They will not organize our lives for us. 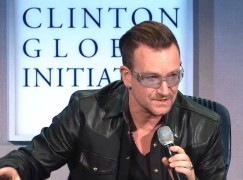 The percussionist with an unforgettable name – Telemachus Lesbines – is no more.

Tele was principal percussionist and timpanist of the Milwaukee Symphony Orchestra for thirty years and a well-known teacher. He was 87. 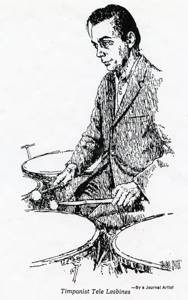 This week, the pipes came out for his memorial service through the streets of New York City from St. John’s Cathedral to a nearby bar. Many early music eminences took part in the parade. 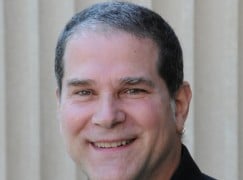 Pat Metheny is a multifarious jazz musician with his own band and a largee global following.

Tim Hazlett sat him down to talk classical. Here’s what emerged:
I read an interview from several years ago where you were asked if you listened to Wagner…to which you replied there was too much modulation going on…you wished he would stay in one place. But you did say you were into the “Russian guys…Stravinsky, Prokofiev, etc…. And the French…Debussy, Ravel and Satie. What classical composers, if any, interest you these days?

I must have meant the Wagner comment as a kind of a joke – actually the more modulations the better for me! While I feel an ongoing attraction to trying to understand all the composers that you listed and many others (Berg, Webern, etc.), I don’t feel like I have ever really had the time to devote to sitting down with scores and spending the months I believe it takes to truly digest that music with the kind of seriousness that I have been compelled to invest in other forms. I keep thinking someday I will. I would love that.

But, I do need to add – as much as I love the musicians on your list there, hands down the most important composer in this general realm for me was J.S. Bach. His music has a place in my life that rivals that of Charlie Parker and John Coltrane in that in addition to loving it as a fan, any time spent under the hood with it also has an instant pragmatic effect on the specifics of what I aspire  to achieve in music myself. 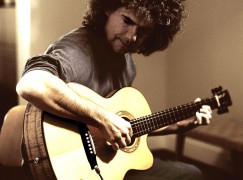 The great composer is in relaxed mood for a Kerri Mason Billboard interview, at home on the East Side.

Like every great artist, he knows where to give a little and where to stand firm.

Here’s Sondheim on  working with Disney:

How did Disney do with Into the Woods?

I thought they did swell; the atmosphere of the movie was fine. Dealing with them and making the script — there are rules that you can’t break. Because “our audience doesn’t like that.” It doesn’t matter whether they’re right or wrong. If you’re going to do a movie for Disney, you know that going in. And if you don’t, you are really dumb. You try to persuade them. You try to be sure that at least the basics you agree on. And the basics, the reason they bought it and the reason we let it be made, were all kosher. But the details?

The Israeli soprano Chen Reiss (pictured) has pulled out of Vienna’s Hänsel und Gretel with an unspecified illness.

She is to be replaced Ileana Tonca, a Romanian singer on the Staatsoper staff.

The obits are starting to flow for Igor Stravinsky’s loyal amanuensis, who died last Tuesday aged 92, and they are uniformly dreary, flat and formulaic.

What’s missing is Craft’s distinctive voice: furiously polemical when anybody else wrote about Stravinsky, withering in a Gore Vidal kind of way, classical in the Greek sense of the word and lofty as Parnassus with a drink in its hand.

We can do no better than bring you a sample of Craft’s savagery against the meticulous, if remote, Stephen Walsh, author of the current academic life of Igor Stravinsky. Sample:

At times the Stravinsky of Walsh’s book reminds me of the biography of Lycurgus, about whom absolutely nothing is known, but who is nevertheless the subject of one of Plutarch’s Lives. The present case is something like the reverse. “Everything” known about the subject is gathered into a gallimaufry of “oral history” (gossip), apocrypha, clippings from unedifying reviews, scraps of correspondence, unqualified opinions, guesses and suppositions, with the result that nothing new of significance is offered either about the music or the man, who in Walsh’s book is all but unrecognizable from the one I knew.

Read the full blast here. It’s on the Naxos site, where Craft recycled many of his own recordings. 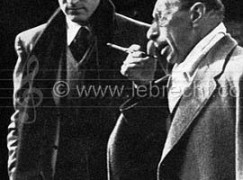 The Square was crowded for a spontaneous solidarity rally last night. 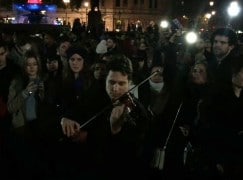 The player was an Israeli student at the Royal College of Music, Bar Markovich.