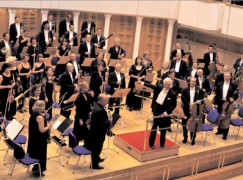 A notice on the website of the Bilkent Symphony Orchestra:

Season opening concerto of the Bilkent Symphony Orchestra scheduled for today, October 10, 2015, is cancelled due to the atrocious terror attack in Ankara today.

At least 85 people were killed in two explosions at a peace rally in the city.

The opening concert, conducted by Avi Ostrowsky, was to have included a John Adams saxophone concerto.