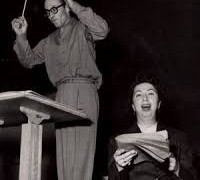 Late-blooming Paris soprano has died, at 98

News just in from Philadelphia that Ethel Semser is no more.

Daughter of a Philadelphia Orchestra viola player, she moved to Paris with her husband in 1949 and started getting roles at the opera and on record.

Until her retirement in 1974 she recorded Amelia in Verdi’s Un Ballo in Maschera, the title role in Gluck’s Alceste (with Jean-Pierre Rampal as flute soloist), and both the Gurrelieder and the Pierrot Lunaire of Schoenberg, with the conductor Rene Leibowitz.  On stage in Paris, she premiered Menotti’s The Consul.

Her husband, Charles Semser, was an eminent sculptor.