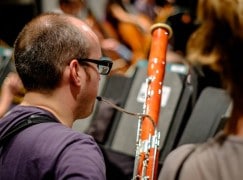 We hear that Pieter Nuytten is leaving the Berlin radio orchestra to return to his former seat as principal bassoon in the Rotterdam Philharmonic. Pieter was two months into a year-long trial in Berlin when changes back home appear (friends say) to have changed his mind.

Rotterdam, after prolonged stagnancy, was sorting out its future with Yannick Nézet-Séguin and hiring players of high quality. An extra bassoon, David Spranger, was recruited from the Beethoven Orchestra Bonn. Auditions are now being held for principal horn, trumpet, viola and leader of the second violins. In the autumn there will be auditions for principal flute and clarinet. This is an orchestra that is moving forward with confidence, enjoying three years more with a popular music director before he assumes an honorary role.

Rotterdam Philharmonic, or Berlin? On balance, it was not that tough a choice.

« Valery Gergiev: The real reason I went to Munich

Dudamel is named ‘a collaborator’ with torture regime »