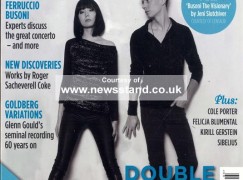 International Piano, which lost its editor last week, will get (as we predicted) a part-time replacement. Owen Mortimer, the new editor, will continue his other duties as associate editor of Opera Now.

Rhinegold Publishing Ltd is delighted to announce that it has appointed a new editor of International Piano, one of its flagship publications.

Owen Mortimer will be taking up his post from the July/August issue of the bi-monthly magazine, which is the leading industry title for performers, students, manufacturers and enthusiasts in the piano world.

Owen, who is currently the deputy editor of Opera Now, said: ‘I’m excited to be at the helm of such an important magazine, which enjoys a loyal and enthusiastic following around the world.

‘I intend to build on International Piano’s reputation as an authoritative and lively forum for every aspect of this versatile and constantly evolving instrument, from profiles of leading soloists to informative resources for amateur players. I’ve recently returned to playing the piano myself, so look forward to picking up some helpful tips along the way!’

Owen holds an MA in music from Oxford University, where he gave his Finals recital on the French horn. He is an accomplished amateur pianist with a particular interest in late 19th- and early 20th-century repertoire. He takes up his new post after three years as deputy editor of Opera Now, a high-profile title in Rhinegold Publishing’s respected stable of performing arts publications, available in print and digital formats.

Ciaran Morton, managing director of Rhinegold Publishing, said: ‘Under Owen Mortimer’s editorship, we are confident that International Piano will expand its coverage and activities to reflect the growing global market in keyboards and piano playing among professional pianists and serious amateurs alike. Owen’s considerable experience of the music industry makes him ideally placed to lead this next phase of development.’ He added: ‘I would also like to acknowledge the huge contribution made by International Piano’s outgoing editor, Claire Jackson, and we wish her every success in her future career.’

Owen will continue his involvement with Opera Now as associate editor, as part of an ongoing consultancy with C Sharp Partnership, which provides editorial and content management services to Rhinegold Publishing.

« Exclusive: Musicians in US orchestra seek to drop their union