Opera image of the month 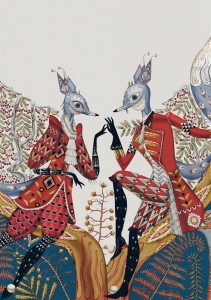 This winter’s opera premiere at the Finnish National Opera is the fairy-tale opera The Cunning Little Vixen by Leoš Janáček, in a production designed by celebrated Finnish designer Klaus Haapaniemi. The FNO’s contribution to the 150th anniversary of the birth of Jean Sibelius is Tero Saarinen’s new work Kullervo to music by Sibelius.

The Cunning Little Vixen by Leoš Janáček will be premiered at the FNO on 23 January 2015. Internationally celebrated Finnish designer Klaus Haapaniemi, who is now based in London, designed a fantastical production for the opera together with set and costume designer Mark Väisänen. Directed by Immo Karaman, the production showcases an encounter between wild nature and human society. Fabian Posca’s choreography brings the colourful animals of the forest to life. The performances will be conducted by Finnish conductor Dalia Stasevska. The cast will include Jaakko Kortekangas and Ville Rusanen as the Forester, Mari Palo and Hanna-Leena Haapamäki as the Fox, and Hanna Rantala and Kaisa Ranta as the Vixen. With this production, the FNO will have staged all of Janáček’s principal operas in the 2000s: Katya Kabanová, Jenůfa and The Makropulos Affair. Unlike these great tragedies, The Cunning Little Vixen will be performed in a Finnish translation and is suitable for the whole family.

When it comes to performance tension, no artist is more candid »