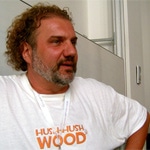 « This is what you’ll hear when the world ends