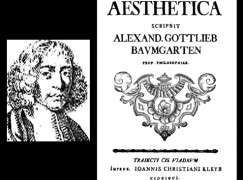 The man who invented aesthetics

Among other anniversaries, next month marks the tercentenary of the birth of Alexander Gottlieb Baumgarten (1714-1762), the German philosopher who invented the idea of aesthetics and applied it to the arts. Before Baumgarten, aesthetics meant ‘sensation’. Since Baumgarten, the meaning has shifted to ‘sensibility’ or ‘sensitivity’, usually to an artistic experience.

Kant said of him (in Critique of Pure Reason, 1781): The Germans are the only people who presently have come to use the word aesthetic[s] to designate what others call the critique of taste. They are doing so on the basis of a false hope conceived by that superb analyst Baumgarten. He hoped to bring our critical judging of the beautiful under rational principles, and to raise the rules for such judging to the level of a lawful science. That endeavour is futile.

Next time you’re judging a music competition, remember that.

« Need to know video: How to open wine without a corkscrew