This is Brooklyn Rider and they are playing the opus 131. It’s a kick-start project and it’s not out for another fortnight, but this stuff is too good to go unheard.

And here’s what they have to say about it:

We decided to explore this idea with a new album, entitled Seven Steps. The album is named after the opening track, our first ever group-composed piece. The process of writing and improvising music collaboratively requires an enormous amount of trust. Symbolically, this process represents seven steps forward in our evolution as a quartet.

The second track of the album is a work by Christopher Tignor, NYC-based composer/band leader by night and software engineer by day, who wrote “Together Into This Unknowable Night” for Brooklyn Rider in 2008. Christopher’s music, informed as much by the vast possibilities of the electronic music universe as it is by his tactile experience as a violinist, seemed to be a natural fit for this album.

The rest of the album features arguably one of the greatest quartets ever written, and one of Beethoven’s greatest works – String Quartet no.14 in C# minor, op.131. One of the central challenges of that piece is that it places huge emotional and physical demands on the player, often posing near-impossible musical juxtapositions. But in demanding the impossible, Beethoven forces us to rise to no less than our full potential, to interact with each other and society on equal terms, to love and to be vulnerable—in short, to experience a sense of catharsis together. Throughout our rehearsal process, we came to understand op. 131 as the story of a life, and the ingenious variation of musical DNA throughout surely creates one of the ultimate motivic journeys in the classical music canon. This is truly mind and spirit-expanding music and it is our privilege as performers to live in this world.

We are very lucky to work on this album with one of the young stars of the recording industry, Grammy-winning engineer Jesse Lewis.The material is recorded, and we are very excited about the result. The album will be available on CD/ all digital retailers, as well as Limited Edition Vinyl. You may ask, “why vinyl?” First of all, vinyl creates a bridge to a past we deeply admire. The medium (in its predecessor, shellac 78s) brought us the unforgettable voices of the Capet, Rosé, and Busch String Quartets along with other greats on up to the advent of the digital age. But beyond the historic links, vinyl is above all a tactile experience for the listener. The simple act of putting a record on the turntable requires more of an investment than a touch screen or track wheel, an investment that results in a more engaged listening environment.

We are asking for your help to make this record a reality. The album will be released by In a Circle Records, a company that was started in 2008 by one of Brooklyn Rider violinists, Johnny Gandelsman. Although this sounds somewhat official, this is completely an independent project. The money we hope to raise will help off-set production, post-production, art design, manufacturing and promotion costs, which are quite substantial.  We need your help so that we can share this album with as many music lovers as possible.

Only they don’t say sh*t. Some of them talk like brass players.

It’s the Liceu in Barcelona, and the wolf is at the door. So they are shutting from March 20 to April 10, and again in June, to stave off total closure.

The Liceu is one of Europe’s best known opera houses, restored from ashes ion the 1990s. Here‘s the story, here in English, and here’s a protest. Still more here. 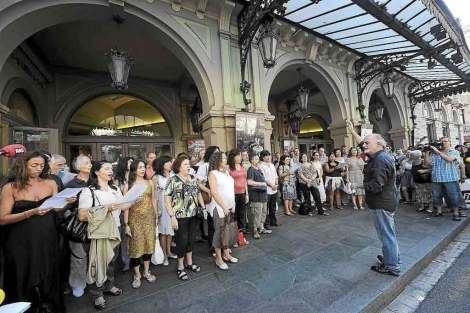 when an unexpected shrill noise brought the concert to a halt.

A fire alarm went off. The orchestra stopped. The hall was evacuated. False alarm. Here‘s one review, and here another.

Worse than the New York cellphone incident, right? Be sure to tell us more, if you were there.

I’ve received a smarmy approach from a PR flak, previously unknown to me, asking for favourable coverage of a Royal fundraiser for the Purcell School.

It goes so far as to offer interviews with the governors – those same governors who have refused to say a word about the sudden departure of the headmaster four months ago. I’m guessing they have no more to say about it now. Until the school comes clean, I cannot see there is much to celebrate for its 50th birthday. Here is the back story, untouched by Britain’s national press. PR letter follows. I hope you are well.

The school was founded in 1962 by Rosemary Rapaport and Irene Foster with the aim to become the first specialist music school of its kind. It has gone on to become just that; nurturing young musicians in an environment where they can develop their musical, academic and social skills with like minded youngsters. They presently house 180 talented musicians in their Hertfordshire site which is both a boarding and day school and takes students on by audition, based on talent, regardless of background and experience. The school remains predominantly funded by the Government’s Music and Dance Scheme with its own scholarship fund which ensures all pupils join the school on the strength of their musical potential irrespective of the parents’ ability to pay.

Some of the successful alumni and governors who are taking part in the event are happy to be interviewed to support the event (i.e. composer Stephen Endleman, governor and ex pupil Janice Woolley), please let me know if this is of interest to you.

We would love to invite you to the event with a view to writing a review. It will be held on the 19th March at The Royal Festival Hall. Please let me know if you are available to attend.

Do not hesitate to let me know if you have any queries. I look forward to hearing from you soon.

has been whisked in from Frankfurt to replace poorly Wolfgang Koch.

There has already been a Fasolt replacement – Thomas Gumbel for Diogenes Randes.

Maybe if the singers were allowed to keep their clothes on, they wouldn’t start sneezing all over the set. 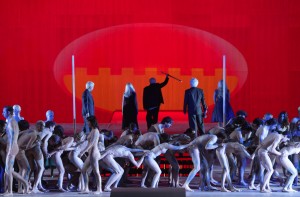 They’ll be asking this one in pub quizzes for years to come. First, here’s what his ex-wife had to say:

The departing Warner chairman, defeated by Universal in the fight for EMI, says he’ll lobby Congress and the EU to block the deal.

It sounds like sour grapes – this was Bronfman’s last press statement before being forced out of his Warner seat by Len Blavatnik’s flaks.

The Tonhalle Orchestra, which has risen to world renown under David Zinman’s inspired leadership since 1995, has been hit by bad results.

The actual loss is quite small – SFr 400,000 ($436,000) on a budget of SFr 29 million, but the underlying trend is alarming. Box-office is down 10 percent, subscriptions 7 percent, and capacity across the last season fell to a record low of 72 percent. Zinman is due to leave in 2014, along with chief executive Elmar Weingarten and president Peter Stüber.

A search committee has been appointed to nominate successors. Read on here.

While director Andreas Kriegenburg hogs the headlines with talk of a post-apocalypse Ring, a near-empty stage and singers running around in their underwear at this Saturday’s opening of the new Munich Ring, the city has also booked Israeli choreographer Saar Magal and seven dancers to stage a ‘Misinterpretation of the Ring’ this coming summer.

Magal, the granddaughter of Holocaust survivors, told Haaretz: ‘Because I come from a culture that doesn’t listen to Wagner and forbids listening to Wagner, I wanted to ask, who is Wagner?’

Sounds more fun than the Staatsoper.

Three frontrunners have been named in Granada to lead one of Spain’s best orchestras.

They are the Tynesider Paul Mann, the BBC Phil conductor Juanjo Mena

and the ex-Berlin oboist and ex-Munich orchestral manager, Hansjörg Schellenberger,

who conducted Berg and Haydn last season and, at 63, may be looking for a spot of winter sun. More here.