His wife will be pleased.

From the Maazel website: Owned by Maestro Lorin Maazel for 66 years, this fine Italian violin by Giovanni Battista Guadagnini has been heard in numerous recordings and concerts worldwide during his long and distinguished career. “I first played this violin when I was 15,” says Maazel, “and it has been my close companion ever since.” The proceeds of the sale will enable The Castleton Festival, which Maazel launched in 2009, to help young instrumentalists, singers and conductors to develop in their professional careers

After spending her adult life as a best-selling artist in France, Britain, Germany and her native Greece – singing in half a dozen languages and appealing to audiences of every age – Nana Mouskouri retired in 2008.

And that was meant to be the end, but Nana is not finished yet.

This month marks her 50th anniversary on stage. When I met her this week in Paris she was rehearsing for a jubilee tour, starting a fortnight from now in Berlin. We talked in a café about her friend Barbara for a documentary I am making, and Nana seemed delighted to reminisce about the small cabarets and clubs where she and Barbara cut their teeth as performers. They shared the same costumier, Mine Verguez. The best.

Nana has served her country in many ways, as a cultural ambassador and, for four years, as a Member of the European Parliament. Now, in Greece’s darkest hour, she strides back on stage, determined to restore its pride. 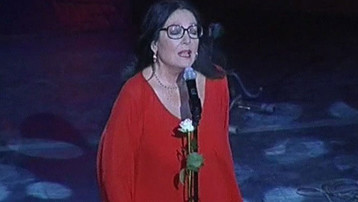 Over the past couple of months, Slipped Disc has been enthusing over a Ukrainian pianist who, entirely by her own resourcefulness, has become the most popular classical keyboard artist on Youtube, outclicking Lang Lang by literally millions of hits.

Last month, fans came from all over the UK to hear her give an impromptu performance in a medieval church outside London. Once more, Slipped Disc had the only report of this mass phenomenon.

Now, as a result of these reports, Valentina Lisitsa has been booked to play the Royal Albert Hall in the run-up to the 2102 London Olympics. That’s a 5,000-seat hall booked for a solo, unknown pianist. We, at Slipped Disc, could not be more thrilled. Book now, before the touts get all the best tickets.

Heralded as ‘a gigantic talent’ and her multi-faceted playing described as ‘dazzling’, pianist Valentina Lisitsa pushes traditional boundaries to reach out to audiences around the globe. Now the most sought-after classical musician on the web performs at the Royal Albert Hall on Tuesday 19June 2012 for a special one-off piano recital.

A champion in the use of new media, with more than 30 million YouTube channel views and more than 42,000 subscribers to her YouTube channel, Valentina Lisitsa is one of the most popular contemporary classical musicians in the world and has changed perceptions on how classical music can be viewed and performed. Last summer, thousands of music fans worldwide witnessed the live broadcast of her practice sessions as she learnt and prepared almost 4 hours of new music in daily 14-hour sessions, allowing Valentina to show a different aspect of her artistic persona. With almost 2 million hits for just one of her videos, she is the most popular pianist on YouTube.

Having performed around the world including debuts with the Chicago Symphony, Seattle Symphony, WDR Cologne, Seoul Philharmonic, San Francisco Symphony and the Pittsburgh Symphony, she has bedazzled audiences with her vast repertoire ranging from Bach and Mozart to Shostakovich and Bernstein. She admits to having a special affinity for the music of Rachmaninoff and Beethoven and continues to add to her vast repertoire each season. Her orchestral repertoire alone includes more than forty concerti. She has also recorded 3 independently released DVDs, including her best-selling set of Chopin’s 24 Etudes, which long held the coveted No.1 spot on the Amazon music video list.

This special concert is presented by the Royal Albert Hall and IMG Artists as part of the Hall’s growing commitment to promote more events itself and provide new and diverse visitor experiences for as wide a range of music lovers as possible. Jasper Hope, Chief Operating Officer at the Hall, said “We are delighted to welcome Valentina Lisitsa to the Hall for her debut performance at the venue. Her presentation of classical music in a modern context and huge online popularity is nothing short of phenomenal and this concert on the world’s most famous stage will no doubt add to her ever growing fan base”

Just another day’s trading at the bank that likes to give bad mortgage-based securities. Or so they sue.

The China blip is here. The Carnegie stuff below. It helps to keep the two deals in proportion.

GOLDMAN SACHS GIVES MAKES MAJOR GIFT
OF MORE THAN $950,000 SUPPORTING THE ACADEMY
Carnegie Hall today announced that Goldman Sachs Gives has made a major gift totaling $951,000 in support of The Academy—a program of Carnegie Hall, The Juilliard School, and the Weill Music Institute in partnership with the New York City Department of Education. A two-year fellowship program, The Academy supports some of the country’s finest young professional musicians in developing careers as top-quality performers and dedicated teachers who are fully engaged with the communities in which they live and work. As an integral part of the program, each Academy fellow partners with a New York City public school, providing support, inspiration, and artistry to students in all five boroughs. This donation from Goldman Sachs Gives, a donor-advised fund, is the largest single-season corporate gift that Carnegie Hall has ever received and was made at the recommendation of Edward C. Forst, Carnegie Hall’s treasurer and member of its board of trustees, and Global Co-Head of the Investment Management Division at Goldman Sachs.“On behalf of The Academy, I would like to thank Goldman Sachs Gives for its generosity,” said Clive Gillinson, Carnegie Hall’s Executive and Artistic Director. “We are especially grateful to Ed Forst, whose own generosity inspired this gift. With The Academy, we are redefining what it means to be a musician in the twenty-first century. We feel, more than ever, that this now requires leadership, a dedication to music education, and a commitment to giving back to the community in addition to being a performer of the highest quality. Service to community is a value that we deeply share with Goldman Sachs and we are thrilled to have the support of Goldman Sachs Gives.”“Art education in New York’s public schools is vital to fostering students’ appreciation of the arts,” said Forst. “We hope this gift from Goldman Sachs Gives will allow The Academy to continue to provide support for young professional musicians and their communities.”

About The Academy
Exemplary performers, dedicated teachers, and advocates for music, the fellows of The Academy are redefining what it means to be a musician today. Fellows of the program—chosen for their musicianship, but also for their leadership qualities and commitment to music education—come from some of the best music schools in the country, including the Curtis Institute of Music, Eastman School of Music, The Juilliard School, Mannes College The New School for Music, New England Conservatory, and Yale School of Music.

As Ensemble ACJW, the fellows are an inspirational musical collective that has earned accolades from critics and audiences alike, not only for the quality of the ensemble’s performances, but also for their fresh and open-minded approach, performing a wide range of music—from centuries past to works written days before an event—in its own series at Carnegie Hall, at Paul Hall at The Juilliard School, and venues throughout New York City.

As part of a twice-annual partnership with Skidmore College that began in 2007, Ensemble ACJW gives master classes to university students and performs for the Saratoga Springs community in both concert halls and in informal settings around town. Alumni of The Academy have continued to utilize skills developed in the program, both in their own professional work and in presenting residencies as Ensemble ACJW both nationally and internationally, in such locations as Mexico, India, Abu Dhabi, Spain, and Germany. All of these activities make The Academy a dynamic program that is fostering musicians dedicated to making music central to all of our cultural lives. Visit acjw.org to learn more.

About Goldman Sachs Gives
Goldman Sachs Gives is a donor-advised fund—a public charity that maintains individual accounts for donors who recommend grants to qualified non-profit organizations from their accounts. Established in 2007, Goldman Sachs Gives enables Goldman Sachs and its people to leverage their donations to charities in the communities where they live and work, or elsewhere around the globe. The focus of this contribution is on those areas that have been proven to be fundamental to creating jobs and economic growth, building and stabilizing communities, honoring service and veterans and increasing educational opportunities.

Predictably, there has been a vast amount of press coverage for Pink Floyd’s remastered edition of The Dark Side of the Moon amid all the usual celebrity hype. Wish You Were Here is now getting the same treatment.

A sharp-eared reporter who actually listened to the album has spotted an alternative version of the title track, with a haunting violin solo.

The player is none other than the jazz violinist Stéphane Grapelli, who happened to be in Abbey Road that day in May 1975. I happen to remember that he was making Strictly for the Birds with Yehudi Menuhin and must have wandered into the Pink Floyd session – as one does at Abbey Road.

Stéphane was a master of improvisation. In my history of classical recording, 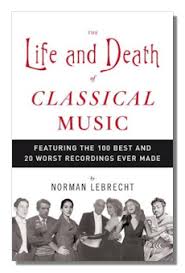 I describe how he wrote some of the Birds tracks in the taxi on his way to Abbey Road, trying to get his name as author onto the album to extract an extra royalty. Late in life, he was still poor as a churchmouse.

I can’t wait to hear his Pink Floyd solo.

I have published an article in today’s El Pais about this year’s Arab Spring in orchestras that has swept away several conductors and managements.

But every time a tyrant was toppled, the problem was contained, unlike the Euro crisis, by a confluence of cowardice and collective self-interest.

There has yet to be a major systemic failure that will change the ground rules of relationships between orchestras and those who presume to rule them, though Philadelphia could well be the breach case, early in the New Year.

This is a running story, and it could start running fast at any time.

There is an English version of the article that I may publish elsewhere. But if you read Spanish, here’s the El Pais link.