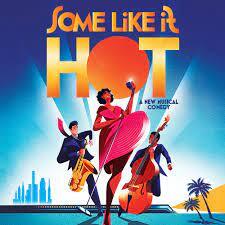 Ruth Leon recommends .. title song of Some Like It Hot

When a new show opens everyone wants to know in advance “Is it going to be good? Worth seeing? Worth spending real money for?” And, of course, there’s almost no way to know in advance. One of the most anticipated openings of this Broadway season is Some Like It Hot,  an upcoming musical based on the 1959 film Some Like It Hot, with music by Marc Shaiman, lyrics by Scott Wittman & Shaiman, and a book by Matthew López & Amber Ruffin. The musical, like the film, follows the story of jazz age musicians struggling during Prohibition.

The producers are promising, “a fast-paced, sassy, brassy cross-country romp, as two best friends run for their lives – and find true love where they least expect it.” On the basis of what I’ve seen so far on Broadway this season, it would be great if the blurb turns out to be true. Here’s what I can tell you, it’s got a terrifically talented cast and a smasher of a title song which the producers have released ahead of time. See what you think.
Read more

Salzburg is sued for 10 million Euros in underpaid fees »