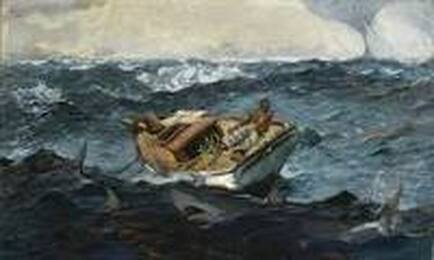 Last time I was in New York I saw this enthralling exhibition at the Metropolitan Museum which has now moved to the National Gallery in London. Until then, I had known very little about Winslow Homer  except his name. Now I know a little more.

Winslow Homer (1836–1910), was a the great American Realist painter who confronted the leading issues facing the United States, and its relationship with both Europe and the Caribbean world, in the final decades of the 19th century.
​
Homer’s career spanned a turning point in North American history. He lived through the American Civil War and the abolition of slavery, so-called Reconstruction, and war with the last colonial European power in the Americas, Spain.

From his sketches of battle and camp life, to dazzling tropical views and darker restless seascapes, the works reflect Homer’s interest in the pressing issues of his time; conflict, race, and the relationship between humankind and the environment – issues still relevant for us today.

After the war, Homer’s subject became the lives of Americans in the wake of the war and abolition with a focus on the lives of formerly enslaved African Americans.

Homer travelled to France, England, the Bahamas, Cuba and Bermuda. In England, he painted scenes of heroism and resilience that he saw while staying in Cullercoats, a town on the North East coast. In the Caribbean, his paintings became more vivid as he painted the transparent turquoise waters and lush vegetation. His interest in conflict remained constant and he often explored the issue through painting the life and struggles of Black people.

With more than fifty paintings, covering over forty years of Homer’s career, ‘Winslow Homer: Force of Nature’ is part of a programme of National Gallery exhibitions that introduce major American artists to a UK and European audience and follows previous exhibitions about George Bellows   and the Ashcan painters,  Frederic Church and Thomas Cole.

This film is an introduction to Homer’s work and well worth watching.