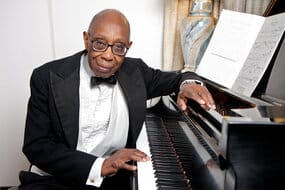 The Phillips Collection Livestreams- A portrait of George Walker

Sunday November 6 at 4pm and then available on demand for 48 hours. Online $15

One of my favourite art galleries in the world is the Phillips Collection in Washington DC, a beloved holdover from the years I lived in that great city. In recent years the Phillips has begun curating some terrific chamber music concerts and, even more recently, they’ve started livestreaming them for the benefit of those of us who don’t live in that great city.

On the 6th, next Sunday, as part of their season of Leading International Composers, there’s a livestreamed concert-profile of composer George Walker.  2022 marks 100 years since Walker’s birth in Washington, DC.

Walker was a trailblazer within the landscape of twentieth and twenty-first century American music. He was the first African-American performer to appear in performance with the Philadelphia Orchestra and the first African-American musician to receive a doctoral degree from Eastman. Walker’s many firsts are perhaps best captured by his singular achievement in 1996: the Pulitzer Prize for Lilacs for Voice and Orchestra.

Despite Walker’s many achievements, much of his chamber music is not widely known. Cellist Seth Parker Woods, who curates this concert-profile, has made advocacy for Walker’s music a central mission. Parker Woods brings together a stellar group of musicians for a portrait that explores several decades of Walker’s career and many sides of his musical development.