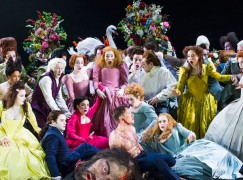 From tonight’s column by the Observer music critic:

No apologies for returning to Arts Council England (ACE)’s funding cuts. The headlines are last week’s but the impact of a single announcement will ricochet through lives and livelihoods for years, starting now. Trimming costs in hard times makes sense. Giving new contenders, all over the country, a slice of the pie is fair. Cutting down, in one wanton act, an entire forest of hard-won achievement is beyond reason or redemption. To penalise a capital city, one of Europe’s most populous and culturally magnetic, is economic folly, quite aside from any other criticisms that might be levelled.

Many issues will arise in the aftershock….

Opera’s losses, the sums more eye-watering, the carping voices louder, have attracted more attention, though not entirely. We should protest loudly against the cut, scarcely addressed, to Welsh National Opera, which is partly funded by ACE, as well as the Arts Council of Wales: a third of its ACE grant has been severed. This for a company that tours beyond Wales to Bristol, Liverpool, Birmingham, Southampton and Oxford, and which this season especially has created some of the finest quality productions around. The cuts to Glyndebourne’s touring arm (pictured) – the very part of the organisation that embraces a wider public around the country, as well as nurturing talent – also appear irrational….

Podcast: Land of grope and fumble »