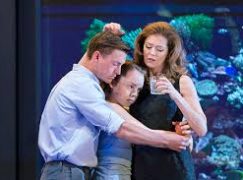 The Canadian soprano and conductor will make her Concertgebouw debut next week.

From the press release:
The concert on Thursday, 1 December is a compact, intimate Late Night programme without interval, in which the audience will be seated on cushions on the floor of the Concertgebouw’s Main Hall. The orchestra will perform Richard Strauss’s Metamorphosen and Claude Vivier’s Lonely Child featuring Aphrodite Patoulidou. The Greek soprano will also be performing a Greek lullaby, accompanying herself on the nyckelharpa, a traditional Swedish string instrument.

On Friday 2 and Sunday 4 December Strauss and Vivier will be part of a more regular concert with interval, which will also feature Samuel Barber’s Mutations from Bach and Alban Berg’s Violin Concerto with soloist Vilde Frang. The programme is a musical voyage of ‘memory, loss, solitude, youthful innocence and coming of age’, in Hannigan’s words.

« Classical streaming is getting crowded