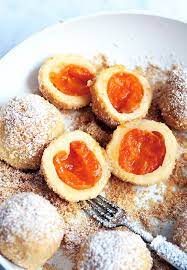 What made Gustav Mahler really happy

Do try this at home. Here’s how you make them….mmmmm:

Gustav Mahler’s favourite dish was Apricot Dumplings – Marillenknödel in German and meruňkové knedlíky in Czech. Marillen is the Austro-Bavarian term for apricots and sweet ripe Austrian apricots are used in this recipe.

Ferdinand I of Austria famously ordered Marillenknödel when apricots were out of season. On being informed of lack of supplies he replied, “I am the Emperor and I want dumplings!” Over time, Austria became a Republic.

So let’s begin! I have been comparing recipes and videos to determine the best way to create Marillenknödel.

What are Apricot dumplings made of apart from apricots? The dumpling dough is either made from a type of farmer’s curd cheese (Topfen) or potato (Erdapfel). The dough is wrapped around the apricots (with pits replaced by a sugar cube) to make round balls. They are placed in boiling water and then rolled in sweetened cinnamon flavoured breadcrumbs before serving. The recipes in this article use curd cheese. White cheese in baking gives a surprisingly light and moist texture.

Here is the recipe used in a video from the Vienna Tourism website and my notes on the side indicate alternative ingredients. The video is simple and brief and gives you the basic steps to create these delicious dumplings.

500 g curd cheese ( or use a mixture of butter and curd cheese, so less cheese)
100g wheat semolina ( or use 200g flour instead of wheat semolina and breadcrumbs)
100 g breadcrumbs
16 g vanilla sugar ( or use 1 tbs granulated sugar + 1 tsp of vanilla extract)
2 eggs
1 dash of rum (optional)
75 g castor sugar
zest of one lemon
8 apricots

Mix ingredients together to make a soft dough.

Put in fridge for minimum 30 minutes

Form a ball with dough

Place apricot in the middle

Place on serving plate and sieve a little icing sugar on top.

Here is a German language video (with subtitles in any language you choose) from the Holidays in Austria website. It take a serious approach to the subject, discussing how the ingredients interact with each other. What it does not do is give quantities but is still worth watching for the approach of chef Markus Lindner :

A doctor writes: Mahler suffered from constipation and haemorrhoids. Consume with discretion.