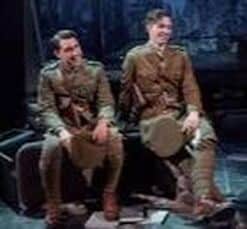 Into Battle is a new play by Hugh Salmon  which reveals the true story of Keith Rae and the Hon. Billy Grenfell who fought a ‘bitter feud’ at Oxford University in the years leading up to World War One but were destined to die fighting alongside each other for the same regiment in the same battle on the same day (30 July 1915). It has been described as ‘Downton Abbey goes to war’.

Into Battle unearths a true story that has been buried for over 100 years: a story revealing the political and social divisions tearing Britain apart in the early years of the 20th century.

In 1906, of the fifty-three freshers who went up to Balliol College, Oxford University, eighteen had been educated at Eton. By 1910 they had formed an exclusive group, including the future war poets, the Hon. Julian Grenfell and Patrick Shaw Stewart.  Standing up to the behaviour of the Etonians were the socially aware Keith Rae and England rugby international Ronald Poulton, who were dedicated to improving the lives of the poor and hungry in the back streets of Oxford.

By 1912, the feud has polarised to Keith Rae and Hon. Billy Grenfell on an individual level. After an incident between them, Billy is sent down for a year, disgracing his aristocratic mother Lady Ettie Desborough. Finally, Into Battle reveals that the differences between Keith and Billy, and their destinies, are resolved in the face of a far greater adversity.

The play takes its title ‘Into Battle’ from a poem by Julian Grenfell  which describes the inspiration that a soldier can take from nature in the quiet contemplative moments before battle. It was published posthumously and enjoyed great success during WW1.

“But Day shall clasp him with strong hands, And Night shall fold him in soft wings.”