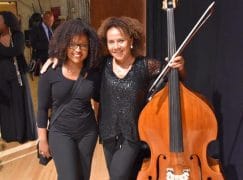 The British diversity youth orchestra, founded by the double-bass player Chi-chi Nwanoku, has been one of the most vibrant additions to the national classical music scene since its inception in 2015.

The high point in Chineke!’s short history was an invitation this summer to the elite Lucerne Festival. The orchestra arrived in Switzerland two days after the death of Queen Elizabeth.

Young musicians in the orchestra suggested they should open with the National Anthem as a mark of respect, or perhaps a minute’s silence. A similar proposal was put forward by the festival management.

Nwanoku refused, saying the Queen represented a British Empire based on racism and the oppression of players’ ancestors. Her comments were heard – and confirmed independently to Slipped Disc – by both British members of the orchestra and the Swiss festival administration.

One orchestral aide asked if it was not odd that Nwanoku should retain her honour as a Commander of the Most Excellent Order of the British Empire (CBE) that she volubly disparaged.

UPDATE: Nwanoku had not travelled to Lucerne as she was attending her daughter’s wedding. The exchanges were conducted by email and copied to the tour management, Askonas Holt. Proof of the exchanges exists in a paper trail.

In the end, Nwanoku agreed that the orchestra should make a solemn addition to its concert, an Othello Suite by Samuel Coleridge-Taylor. The soloist, Sheku Kanneh-Mason, played a solo tribute of his own.

Chineke! is funded by the British state through Arts Council England. Nwanoku draws substantial fees for her involvement. It would have been courteous, to say the least, to acknowledge the nation’s mourning at its prestigious concert.

The incidents described here were witnessed by many people, who testified to Slipped Disc. We asked Ms Nwanoku for a response to various upheavals at Chineke! and are waiting to hear from her.

« So the next Vienna Opera music director will be …

Happiness: Pires is back on stage »