The German airline led the way in nurturing an excellent staff orchestra and flying it around the world to new destinations.

Now Air France has set off in pursuit with a film of Stravinsky’s Firebird made with the Orchestre Philharmonique de Radio France and conducted by one of its own pilots, Daniel Harding. 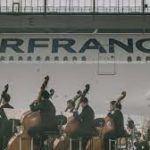 The feature film was shot in a hangar at the Paris Charles-de-Gaulle airport, with some stray luggage visible at the periphery.

It’s a decent performance, only slightly pretentious in concept and execution. Airlines are presently in an all-out campaign to upgrade their image in order to attract business-class and first-class passengers.

Harding is music director of the Swedish Radio Symphony Orchestra and a part-time Air France pilot.

« Lebrecht essay: Some conductors have too much time on their hands

When a music director owns the production »