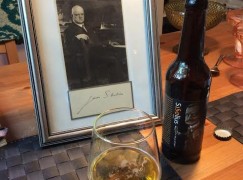 These ice-cold songs are coming with me to the shower

Sibelius, like Mahler, stuck to what he knew. He wrote no opera and hardly any chamber music, just symphonies and songs. His concentration of means and expression is as intense in a two-minute song as it is in a forty-minute symphony.

Unlike Mahler, Sibelius is sparing with his orchestration, sometimes leaving it to solo clarinet and lower strings. He uses Swedish texts, only rarely reverting to his national language, Finnish, which he spoke imperfectly. The Sibelius songs are seldom heard below the Baltic, which is a pity since they tell us more about him than yet another season-opening Finlandia. In all, Sibelius wrote 109 songs. I challenge you to name three…