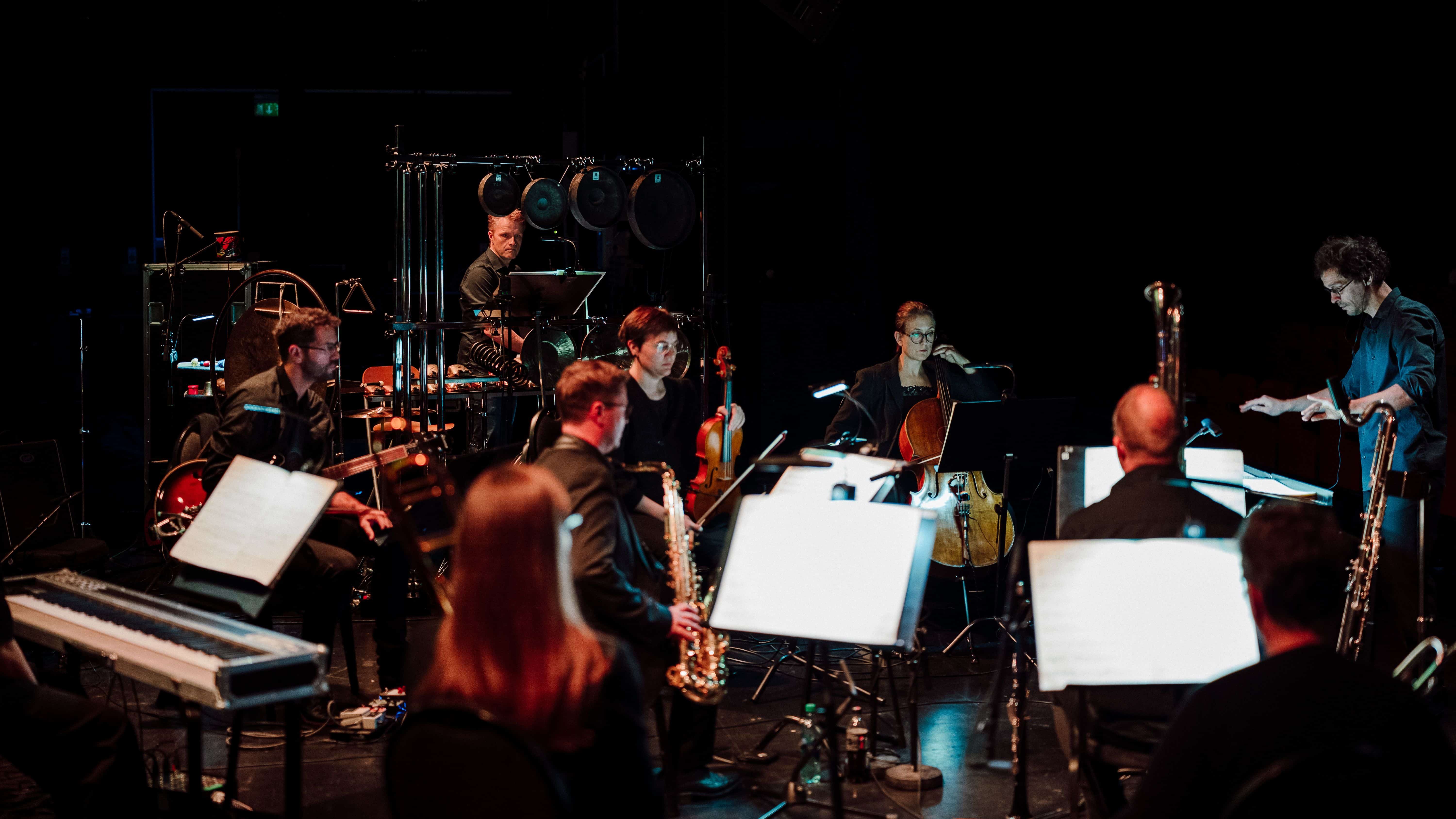 The audience that likes to shout, Yes!

Hans-Kristian Kjos Sorensen reaches for a row of metal pipes tenuously suspended on twisted wire from a frame, and thwacks them. Next to the severed pipes, several beer bottles, filled to varying degrees with fluid, also come in for a bashing. Meanwhile, Tanja Tetzlaff coaxes unlikely sounds from her cello, with the assistance of enough amplification to balance the percussion. Behind them in the accompanying orchestra, the entire second violin section has tuned to a note that is a quarter tone lower than the rest of the players.

Olga Neuwirth’s new double concerto “According to What” is full of odd surprises. Its world premiere last night at Trondheim’s Chamber Music Festival was a tour-de-force, played with frantic force by the soloists and the Trondheim Symphony Orchestra under Baldur Brönimann. Neuwirth is this year’s composer-in-residence at the Festival, and her dense, fierce music has featured prominently all week in the Nordic fjord city.

Sorensen plays found objects, tuned gongs, and a battery of more traditional percussion instruments next to Tetzlaff’s cello, played with extended techniques and ferocious focus. Neuwirth’s score is pithy and complex, full of quarter-tones and rhythmic complexity, some of it like written-out jazz or an attempt to notate the way the Viennese hesitate for an instant on the third beat of a waltz – bewildering on paper, but logical when played. Credit to Brönimann and the orchestra for bringing the piece to life with such precision and assurance.

Neuwirth, winner of multiple major international awards, has clawed her way to the top of a male-dominated profession with uncompromising intensity. Her music makes huge demands of both performer and listener, and is commensurately rewarding. Earnest and witty, teeming with references but never derivative, Neuwirth’s music is endlessly inventive and resolutely original.

Trondheim, a university town of some 200,000 around an hour’s flight north of Oslo, has a devoted audience for its chamber music festival. Founded 26 years ago, the little Festival still feels fresh. Its combination of earnest interpretations, a lighthearted atmosphere, and offbeat venues, from the more traditional Olavshallen for symphony concerts and the local Masonic Lodge to private homes and a dockside pub, keeps locals coming back year after year.

Amongst this week’s highlights were Frank Havroy and Gunnar Flagstad’s reimagination of Schubert’s Schwanengesang as a jazz-infused cabaret evening, Quatuor Confluence’s spirited and savage account of Bartok’s String Quartet Nr 4, and a live performance of Neuwirth’s music for the recently re-discovered 1920 silent movie +The City Without Jews+, chilling in its prescient account of a Vienna purged of its Jewish population – though with an imagined happy end. Neuwirth uses nine instruments (the excellent Trondheim Sinfonietta) and electronics to evoke the ghosts of the long-dead protagonists; the author of the book on which the film is based, Hugo Bettauer, was murdered by a Nazi sympathiser in 1925.

In a late-night pub concert, ‘100% Neuwirth’, a number of chamber works were brought to vivid life. ‘Magig Flu-idity’ is scored for flute and typewriter; ‘In Nacht und Eis’ combines bassoon, cello, and ring modulator; CoronAtion III weaves together tenor saxophone, bass clarinet, and electric bass with the recorded sounds of birds and frogs, and a whole bunch of the composer’s friends saying the word “No!”.

Rendered with a high degree of virtuosity and received by a full house with rapturous applause, it felt more like a “Yes!”

Just in: Lyon nails down Nikolaj »