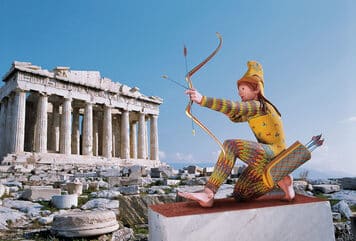 On the day I first visited the Parthenon in Athens, someone, I’ve forgotten who, but someone who appeared to know his stuff, told me that the pristine whiteness of the marble had been only the starting point. He said that when it was built, every part of this amazing edifice was brightly painted and so were the sculptured figures that then filled every nook and alcove.  Ever since, I’ve been trying to imagine how the ancient structures and sculptures that we see today must have looked to contemporary Athenians. As it turns out, I’m not the only one.

Now, at the Met Museum in New York, there’s an exhibition of Polychromy called “Chroma: Ancient Sculpture in Color”. Archaeologists Vinzenz and Ulrike Koch Brinkmann  have spent the last 40 years dedicated to the study of polychromy—or “many colours” in Greek—in ancient sculpture. Once a fringe area of study, their research combats the misconception of white purity in ancient Greece and Rome. They reflect on the marble bust of Caligula and other famous statues, and how the reconstruction of their former colours can help us better understand history.

Two hardworking scholars, Vinzenz and Ulrike Koch Brinkmann, have devoted their lives and scholarship to investigating the original colours of ancient statuary and reproducing them on plaster models of some well known friezes and sculptures, alongside their white marble exhibits.  It’s fascinating.

To modern eyes these colours look too bright, too garish, too amateurish but, say the Brinkmanns, what they have uncovered through years of painstaking work, is how they actually looked when they were new. There isn’t room here to reproduce more of these startling artefacts but I looked them up online at ‘Vinzenz and Ulrike Koch Brinkmann images ‘and they popped right up.

Emerson said: ‘Life is a journey, not a destination’ »