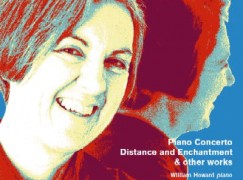 Master of the King’s Musick is managing a transition

When Judith Weir received the Royal Command in 2014, she was the first woman ever to serve as Master of the Queen’s Musick, a title that dates back to 1626.

No-one proposed, then or now, to modify the term Master in a manner that made it more gender inclusive.

This week, Judith became Master of the King’s Musick, a significant change of title, if not of function.

She tells the Washington Post: ‘ I think most of us have grown up with, as we knew him, Prince Charles. He actually is a most unusual lover of classical music. He was a cellist in his youth, played in college orchestra and really intensely loves classical music. He’s made some very touching statements when interviewed about his interests and has made it clear that it’s absolutely top of the list. I don’t expect there to be less interest in what we musicians do, and I’m sort of anticipating that there’s a chance for us to do even more, once he gets over the huge backlog of work he has to do.’