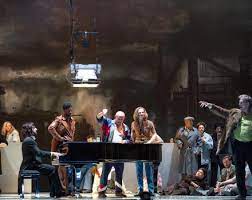 Set in imperial Russia, Tchaikovsky’s late brooding thriller about a fanatic gambler is a tour de force of stirring melancholy, consuming passion and grand sweeping orchestration. If the opera saw the light of day thanks to his brother, the librettist Modest Tchaikovsky, Pikovaya Dama (Queen of Spades) soon became Tchaikovsky’s own personal obsession. Composed in only 44 days, he considered it a masterpiece. Do the fears and neuroses of the characters in Pikovaya Dama have a particular resonance with our age? This is what the director David Marton sets out to explore in this new production which opens the 2022-23 season in Brussels. Conductor Nathalie Stutzmann presides over an excellent cast with the full forces of La Monnaie’s Symphony Orchestra and Choruses. Hermann is sung by Dmitry Golovnin. Count Tomsky-Zlatogor by Laurent Naouri, Prince Yeletsky by Jacques Imbrailo and the Countess by Anne Sofie von Otter.

The Plot: in love with an unknown lady, a young soldier discovers that her grandmother holds a secret to win at cards. Although his beloved shares his feelings, happiness slips out of reach when his obsession with the powerful secret drives him to madness.

Peace in our time in Minnesota »