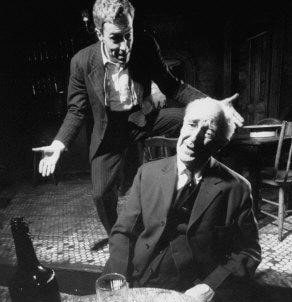 Ruth Leon recommends… PERFORMANCES TO KNOCK YOUR SOCKS OFF

PERFORMANCES TO KNOCK YOUR SOCKS OFF  –The Iceman Cometh

I have been remembering that in former times we only had one opportunity to see a great play or star performance in its first production. If we missed it, we missed it. No more.

Many of these great performances are still available on YouTube and elsewhere, although the older generation, unused to this amazing worldwide treat, often doesn’t know they’re there or how to access them.

Now, while there’s a summer lull in the availability of current online videos as the theatres gear up for the Autumn season, I thought I might share a few past productions which have knocked my socks off in yesteryear or would have done if I’d been old enough, smart enough, perceptive enough, or had enough pocket money.

Here’s one of the performances that I’ve always regretted missing and can see now, Jason Robard’s  astounding Hickey in O’Neill’s The Iceman Cometh, recorded in 1960, directed by Sidney Lumet. I was only 15 at the time and living on the wrong side of the Atlantic.
Read more

« A rigged piano competition in Texas