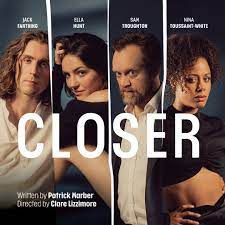 There is an excellent revival of Patrick Marber’s 1997 shocker about sex and lust and sex and, well, you get the idea, at the Lyric Hammersmith. Claire Lizzimore’s forensic production hits just the right notes from the original and adds new insights with the benefit of the years since.

The four protagonists who fall for and then swap partners are carefully drawn by Marber. There’s Alice, feckless, beautiful Alice who gives up stripping for love of Dan. There’s Dan, disengaged writer who plunders Alice’s life as the source for his novel only to fall in lust with self-contained photographer Anna who divorces physician Larry to be with Dan who turns back to Alice, as Larry does to Anna. Still with me?

Closer is a play about sex, stunningly frank, about what we will give to a lover and what we withhold. I remember being truly shocked when I first saw Closer by the openness of an early scene in which the two men tell each other their sexual fantasies, online, one pretending to be a woman. Today, I am less easily shocked but still have the capacity to be stunned by Marber’s skill at delineating character and motive.

All four actors – Jack Farthing, Ella Hunt, Nina Toussaint-White and especially Sam Troughton as the tortured doctor, Larry, are excellent. And the director adds a significant extra to the stage picture by having four shadowy figures, almost unseen, move behind the action and the on-stage band, in silent response to the dialogue like a Greek chorus, seen but unseen.  There are hints of Chekhov here, and Shakespeare, in a thoroughly satisfying revival which, in many ways, improves on its 1997 premiere.

« US quartet replaces its violist