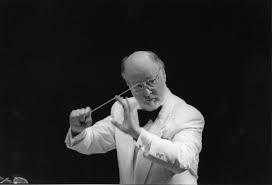 How John Williams became a conductor

The Berkshire Eagle has the inside story of how the Hollywood composer succeeded the everlasting Arthur Fiedler as chief conductor of the Boston Pops.

… As (Tom) Morris recollected, (Andre) Previn told him that Williams “is the consummate pro — he knows the instrument of the symphony orchestra better than anyone Previn had ever met, he knows how it works, how it sounds, how to work with it and conduct it” based on extensive experience with movie studio orchestras.

Williams seemed the ideal choice, but in view of his busy Hollywood career: Was he interested in taking on the Boston Pops? After a Boston Globe article in late 1979 listed him among the candidates, Morris received a letter from Williams stating that he had seen the article and was flattered to be considered.

After he agreed to guest-conduct a 50th anniversary Boston Pops gala at New York’s Carnegie Hall in early 1980, he was interviewed secretly by search committee members and by Music Director Seiji Ozawa. “Everyone was impressed with him,” said Morris, but his level of interest remained uncertain….

« Janine Jansen is out