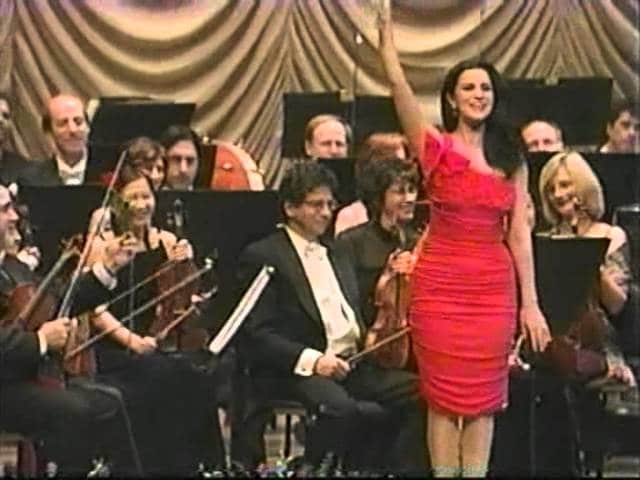 The fiery Romanian soprano lets rip at a compatriot conductor. There are doubtless two sides to this story. This is hers (the original is in Romanian):

Although I did not want to come back to this topic, I have to write a clear message, after very virulent reactions appeared in the Romanian media – most of them expressed without any reason.

My reaction towards the conductor Cristian Macelaru comes after I was talked about or, in Romanian, lied to by him – the second Romanian who behaved in this inexplicable and unqualified way in the last 12 months.

I have been invited since last year in October 2021 by Didier de Cottignies (my lifelong friend, whom I met since signing with Decca, early in my career) to attend the 14th annual concert July from Paris by day National Team of France Didier is the one who appointed Cristian Macelaru as Artistic Director of the National Orchestra of France, and my invitation to the concert came after Didier spoke with Cristian Măcelaru.

My contracts are done ahead of time, through the management agency, I don’t deal with the contract details directly with the promoter and I couldn’t because I don’t have the time and I have a team that knows exactly what to do. However, Cristian Măcelaru being a Romanian, I said I could discuss with him directly about the repertoire, it seemed to me a normal collegiate gesture towards a countryman of mine, whom I met waiting in front of my booths, at the end of the show, in mainly in America . This is how we had several phone calls and texts between November 2021 – April 2022.. Then, as I said, inexplicably, Cristian Măcelaru disappeared! Even more, I found out from my agency, through a secretary of the Orchestra, that I will no longer participate in this concert. For no reason at all. From a secretary ….

Last year, this same thing happened to Opera Națională București and not only to me, although only I had the courage to say it, unlike other colleagues in similar situations who either stumbled or kept quiet. In short, I was invited last year, in June 2021 (and this only after a post that went viral on Facebook), to perform in an extraordinary concert, around the New Year, on the anniversary of the ONB’s centenary.

All contractual details were finalised by my management and on 14th July 2021 it was confirmed by both parties a gala gig for 31st December 2021. My managers have been waiting for this contract for months, they asked, they wrote… but ONB disappeared completely and didn’t even answer (as Cristian Măcelaru would do in a few months).
The protagonist of this episode was Daniel Jinga, meanwhile, appointed Director General of ONB, following a contest with a single candidate.

Things are very clear…
The above fits into a pattern of behavior that, over time, too many fellow countrymen have expressed towards me. And that I could and can miss out on.

As for my preference for certain Romanian musicians, musicians with real careers, others over those who are excessively “promoted” in Romania – this comes after for decades I have been present worldwide, in all major concert halls opera houses, in all cultural capitals, and i’ve met and befriended my fellow musicians whether they r singers or great conductors… and where we found out – from objective and authorized perspectives, of true legends of music, and in open and honest conversations, without propaganda and without petty interests – who really had important careers, and who didn’t.

Of course, everyone is free to listen to who they want, to like who they choose, but it is a pity that in Romania there is no more talk about other Romanian musicians, composers, opera singers, whose compositions or careers are much more important. ante for UNIVERSAL music history

I owe nothing to Romania, I have never been supported by this state or by its institutions in my career, on the contrary, I have supported Romanian musicians and colleagues, inviting them to my concerts and shows, the important honors, all over the car my yesterday.
Of these I remember the conductors of Calin Bratescu , Tiberiu Soare, Ciprian Teodora Ccu, the tenors of @TAG, Ion Marin , Bogdan Mihai Ionut, Marius Brenciu, Marius Manea, Vlad Miriţă , Teodor Ilincai , Marius Budoiu… on the soprano Iulia Isaev and on the baritone Alexandru Petrovici , on the pianists George Petean , Alexandra Dariescu and Dan Grigore.

Yes, I even invited Filarmonica “George Enescu” from Bucharest to my concert in Oman, Muscat and to my concert in Luxembourg (on the occasion of Romania’s accession to the European Union)… although the philharmonic never invited me I invited Corul Madrigal and Marin Constantin for the recording of the disc with sacred (religious) music Mysterium, in London, a disc on which I recorded including Romanian Orthodox music specially orchestrated for this recording. On my initiative, the BBC came to Romania and made a documentary with this music, at the monasteries in Moldova. I wasn’t forced to invite them I could invite who I wanted like I’m doing now.

In Romania, in 32 years, I had 4 or 5 concerts with honours and 8-10 concerts or appearances in charity concerts, no opera performances with the exception of the Bucharest University of Music bachelor’s exam, which took place in Cluj in 1990… I never ended up signing a contract with ONB or with another cultural institution in Romania.
I have dedicated my whole life to music and especially Romanian music, which I sing in all my concerts, my nationality is Romanian, my origin from Adjud is known to a whole world and I mention it in all my presentations and biographies that I receive is.
In fact, I don’t owe anyone any explanation, on the contrary, I owe explanations from many, but I thought that for once things needed to be made clear.

I wish you all more understanding and more genuine patriotism that goes beyond the facebook comment stage. Nationalist, extreme, anti feminist sentences, comments made for the sake of scandal, without a minimum of information and respect, are not happening in 2022 and never.
Yours and the whole world,

« Munich gets police escort for soprano